The Exmouth branch of the Royal Marines Association are pleased to announce that this year’s Armed Forces Day is to be held within the Strand Gardens on Saturday 22nd June.
Don't forget to listen to Radio Exe this Saturday morning as we will bringing you live coverage from the event on air and online. 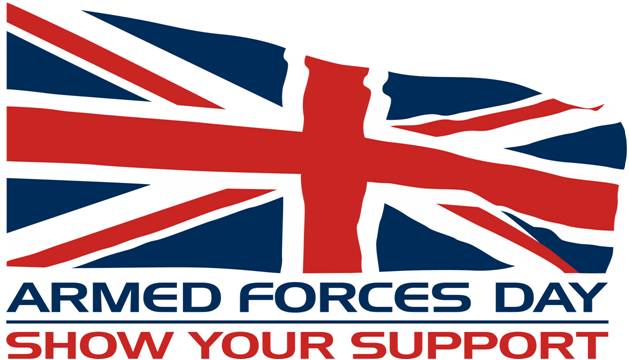 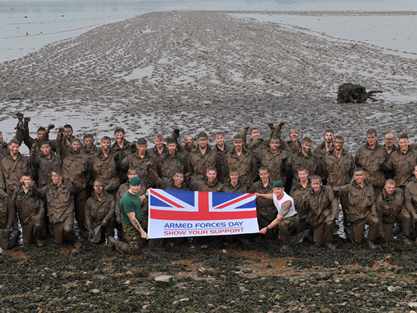 The focus for the day will be to celebrate Armed Forces Day and to incorporate the re-adoption of Exmouth Town to the Royal Marines. The event will also include military Veteran Associations and the following Cadet Corps: Exmouth Sea/RM Cadets, RMVCC, Army Cadet Corps, Exmouth Air Training Corps and the Air Training Corps Devon & Somerset Band.
A parade, lead by The Band of Her Majesty’s Royal Marines Commando Training Centre, will commence from The Park Hotel at 1010 hours, moving down the Old Exeter Road, continuing into the Town via The Parade, into Rolle St. and into The Strand Gardens.
Within The Strand Gardens, as part of the Armed Forces Day celebrations, a wreath-laying ceremony will be followed by a Band display conducted by the Band of Her Majesty’s Royal Marines CTCRM. At the end of the display the Exmouth Town Mayor Cllr. John Humphries, will officially open the event.
After a short interlude the Town Mayor will conduct the Exmouth Town re-adoption ceremony to the Royal Marines. This will be followed by a parade of:  Serving Royal Marines, RM Veterans and RM Cadets exercising their right to march through the Town with Bayonets fixed, Colours Flying and Drums Beating. 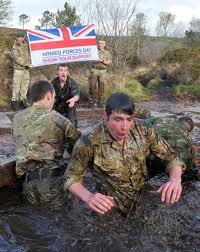 The Parade will march via Rolle Street into High St, towards the Esplanade. At the Esplanade the parade will turn towards the Exmouth Pavilion. At the Clock Tower the salute will be taken by the Commandant CTCRM. The parade will then halt at the Exmouth Pavilion. Those on parade will be invited into the Pavilion for a civic reception hosted by Exmouth Town Council.
Activities supporting Armed Forces Day within The Strand Gardens will be: Lympstone Military Wives Choir, Morris dancing by The Sidmouth Steppers, "The Bombshells” Still Moving Dance Troupe, a display presented by the Royal Marines Physical Training Branch, Air Training Corps Devon & Somerset Band display and a Cadet Corps Interval Drill competition. On completion the main draw will take place. Prizes have kindly been donated by local businesses and individuals.
Following on from the days events Beat Retreat will be played by the Band of Her Majesty’s Royal Marines Commando Training Centre within the Estuary car park.
Why not come on down and ‘Show Your Support’ and join in with the celebrations. Many other attractions and stalls will be on offer.

Please note that the Old Exeter Road and Rolle St will be closed to traffic from 1000-1030. Rolle St, High St, Alexandra Terrace and the Esplanade will also be closed from 1100-1145. Apologies for any inconvenience caused during these closures.