Exeter has a new professional rep season. It's kicked off with one of William Shakespeare’s most beloved comedies, Twelfth Night: the story of twins Voila and Sebastian who become separated after a shipwreck. In a typical piece of Shakespearean cross-dressing, Voila disguise herself as her brother to enter Duke Orsino’s service. But soon enough Sebastian reappears, with the inevitable which-one's-which results.

If you've never experienced Twelfth Night, this is Shakespeare to enjoy without fear; it's straightforward to follow, everything is in the story as much as the words. Yes, the Tudor language does include sections that are hard on the second-Elizabethan ear, but the portrayals of Shakespeare's characters make every word their own: there are laughs and gags throughout. Who knew that yellow stockings on a man could be so alarming and amusing? The cast's comic timing is beautifully engineered and made for some laugh out loud moments, with the sword fight between Sir Andrew Aguecheek and Viola just hilarious. If you miss the odd sentence or can't grasp the meaning of some bits, so what? The play's the thing. You'll capture the conscience and the swing.

This is bold, strong acting; great direction; wonderful craft support. And great to see professional repertory theatre back at the Barnfield, so it's a company that deserves support.

Twelfth Night, a Kickline production and part of the Barnfield's Love in Disguise season, runs until Saturday 24 February

Listen to our interview with Philip Voyvey, who plays Feste in Twelfth Night, below: 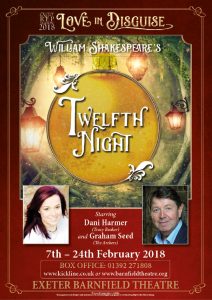