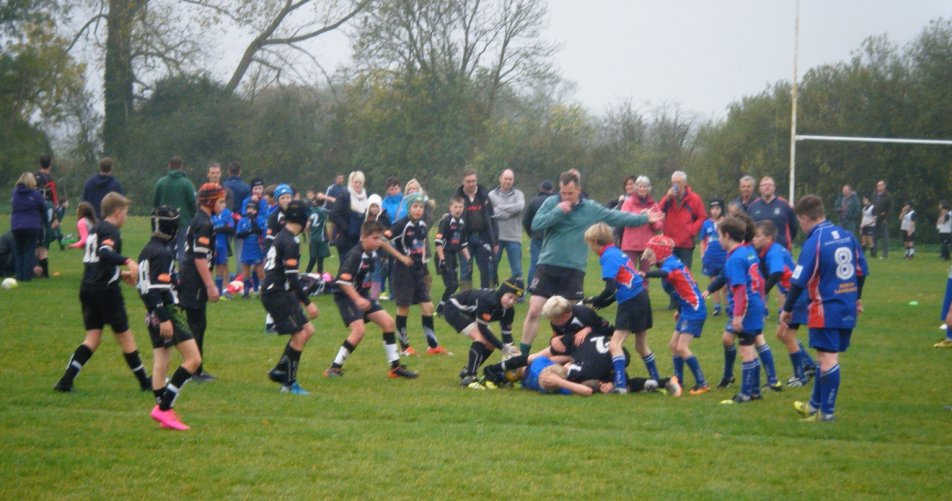 Another excellent game for the boys as Exeter Athletics U12's defeat Cullompton on home soil.

The match was played as 4 quarters 9 players a side.

Q1 Ex 3 - Cul 2.
After having an initial try scored against them, and worrying everyone that we were going to be off to a slow start again, we then scored with Liam (2) & Max to win the quarter. There was a great string of passes from Kit-Edward-Ollie to send Liam over the line. Unfortunately we lost Noah after Q1 and subbed in a Cul player.

Q2 Ex - 2 Cul 2
Some spirited running from Kit, excellent powering carry’s from Charlie and Liam, and lots of tackling from Mikey preventing Cul from gaining any momentum, not to mention a Try from Max after running the full length of the pitch!  Unfortunately we lost Max to injury and were subbed another colts player.

Q3 Ex 4. - Cul 0
Some excellent driving again from Charlie, with good support from Edward & Ollie.  A set piece from an Exeter scrum led to a series of passes giving us a great try. Cullumpton we’re doing a lot of kicking throughout the match forcing the team to do lots of running from their own half, however this often led to an Exeter try (Kit, Kit, Ollie, Cul).

Q4 Ex 0 - Cul 2
Some good carries from Henry gaining the team valuable ground, Excellent try saving tackles from Ollie & Mikey scuppering the chances for an opposition try on more than one occasion. We unfortunately lost Henry early on in the quarter with an Injury, and almost Mikey too.  Now having only 6 of our original 9 players meant we lost a bit of cohesion, however we fended them off and limited them to 2 tries.  Well done everyone, that was probably the longest match you have played this season, and kept us onlookers entertained throughout.