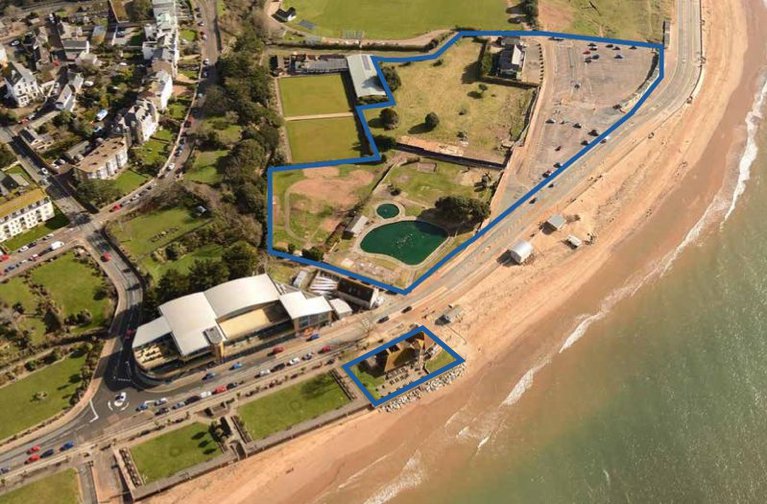 Redevelopment plans for Exmouth seafront should be in place by the end of 2021, the leader of East Devon District Council has declared.

Speaking at Wednesday night’s full council meeting, Cllr Ben Ingham, leader of the council, said that the council must take responsibility and ownership for the project and get on with the project.

He said that when he heard that plans may take another three years to come to fruition, he said that was unacceptable, and he expected something to be in place in just over two years’ time.

Cllr Ingham also confirmed that Phase 3 proposals, which included the Harbour View café site, would involve a mix of public space, continued popular free play facilities and the kind of commercial developments that will pay for those elements and benefit Exmouth’s economy.

Exmouth residents will shortly have the chance to hear about ideas for the future of the Queen’s Drive area of the town at a public exhibition on Thursday, November 14, at the Ocean Suite, LED Ocean, Exmouth, from 5.30pm to 7.30pm, organised by Hemingway Design and supported by East Devon District Council, while interested members of the public will also be able to view the exhibition materials at a public drop-in at LED Ocean on the previous day, Wednesday, November 13, from 12pm to 4.30pm.

Cllr Philip Skinner had asked Cllr Ingham to let the council know what his thoughts are on Phase 3 and Harbour View Cafe going forward were and if his administration would adhere to the formally adopted masterplan which links in very much with Exmouth’s neighbourhood plan and Exmouth’s vision.

In response, Cllr Ingham said: “We are moving forward with Phase 3 to complete the Queen’s Drive development with a further public engagement by Hemingway Design in November. This includes the Harbour View café site.

“Proposals are emerging for a mix of public space, continued popular free play facilities and the kind of commercial developments that will pay for those elements and benefit Exmouth’s economy. This is very much in keeping with the principles laid out some years ago in the Exmouth masterplan and much more recently the policies agreed by Exmouth people in their Neighbourhood Plan.”

Asked about timescales, Cllr Ingham said waiting another three years was ‘unacceptable’ and that he hoped to focus everyone’s minds and get it done by the end of 2021.

He added: “It is this administration’s view that a new and sharper focus was needed on delivering the final phase of the Queen’s Drive development and that is what we are doing. You have heard my aspirations so we have got to get cracking.

“That is not to say that the Council may not then also turn its attention to other important projects for Exmouth but let’s sort out the final phase of Queen’s Drive first.”

Following the public events set to take next month, Cllr Ingham said that he hopes that there will be another public meeting to be arranged either just before or just after the Christmas and New Year period where the public can give their feedback on the proposals that Wayne Hemingway has put forward, which will then enable the cabinet and the council to start taking the key decisions early in 2020.

Hemingway Design are encouraging as many people as possible to attend the presentation – A Vision for Queen’s Drive – and to learn more about the site’s potential to become a recognised regional destination and to thus benefit the town and its community.

HemingwayDesign will outline the valued feedback they received from the online survey and how the views of respondents have guided the proposals, and the exhibition will also look at ways that these opportunities can be realistically made to happen.

On hand to advise on the deliverability will be commercial property advisors Lambert Smith Hampton, who have been testing the existing planning consent and new ideas against the current development market, ie under real market conditions.

Mr Hemingway said: “Queen’s Drive is a very special location with the potential to act as a catalyst of positive change for Exmouth. What we are looking at is the means to ‘unlock’ the potential modern visitor offer for the town while not losing the essential natural character of Exmouth.

“We welcome people’s views on the Vision for Queen’s Drive and look forward to receiving feedback from the public.”

Cllr Kevin Blakey, East Devon’s portfolio holder for economy, added: “The council is keen to encourage as many people as possible to try to attend the public engagement events in November to find out more about the many opportunities that are waiting to be realised and to share their views with the team. This will help decisions to be made on the future of Exmouth seafront.

“Hemingway Design’s creative collaborative approach allows local voices to be heard and we are confident that this will be effective in ensuring that Exmouth becomes an even better destination, as well as an exciting and economically dynamic beacon on the Jurassic Coast.”

The proposals for Queen’s Drive are the third and final stage of the seafront redevelopment.

Phase 1 – the relocation of the road and the car park – has been completed.

Phase 2 is the construction of Sideshore, the upcoming Watersports centre on Exmouth seafront, which will also house a Michael Caines run restaurant, has begun and is set to open next summer.

Simon Lawrence, Contract Manager, Devon Contractors Ltd: “Work is progressing well, the enabling works have seen the hoardings, security fencing and access gates erected. Works to remove the existing tarmac surface and excavate the site are underway. We have begun laying the foundations for the main building and expect the steel works to be in place in the coming weeks.”