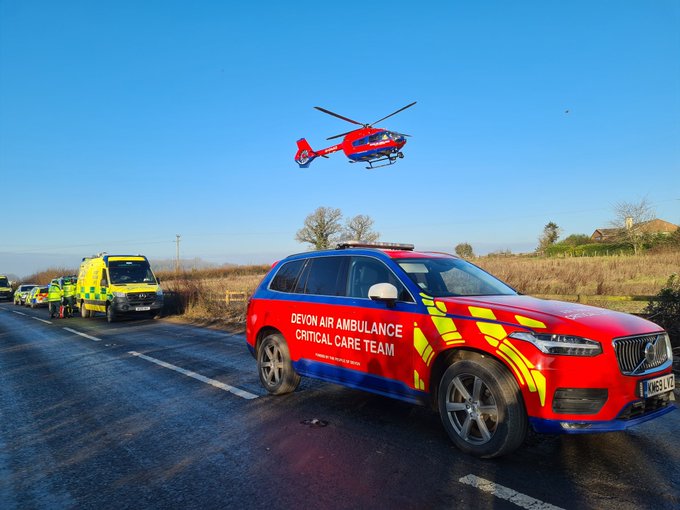 One year since their cars hit the road

In February 2020 Devon Air Ambulance (DAA) introduced two rapid response Critical Care Cars (CCC) to their fleet. Now, a year on, DAA is celebrating the anniversary of their first mission on 3 March 2020 and highlight the difference they have made to the service and their patients.
Whilst being a helicopter-led emergency service, it’s clear that DAA’s Critical Care Cars have enabled the charity to build resilience and extend their enhanced and critical care service across Devon.

“As we launched these two new vehicles into service, we estimated that in our first year of operation the critical care cars might be called to respond to somewhere in the region of 200 incidents, however, since 3 March 2020 we have actually been tasked to over 470 missions.

By introducing the two critical care cars to Devon, I'm convinced that we have impacted hundreds of patients, reducing suffering and saving lives.”
The CCC are primarily located at each airbase, one at Exeter Airport and the other in North Devon at the Eaglescott airfield. This means that crews can quickly use the vehicles at short notice should adverse weather or mechanical fault mean they can’t respond to an emergency by helicopter. The CCC can also be beneficial if the patient is located near to an airbase, when it may in fact be quicker for the team to reach a patient by responding by car rather than using the aircraft at all.

The two Volvo XC90’s have a high-performance powerful hybrid engine that offers good handling at speeds over rough road surfaces and as a 4-wheel drive, they can get us safely off-road and into the Devon countryside when needed. This car also has lots of space with ample seating for the medical team and a large boot for all their kit and medical equipment. The generous storage space means there is spare capacity, just in case new equipment or kit might be required in the future. Having the extra space is extremely useful right now, as the crew need to carry supplies of essential Personal Protective Equipment to wear when assisting patients.

“We’re so proud to support Devon Air Ambulance. Their cars having clocked up 470 missions in their first year is a testament to the importance of the service the charity provides.

‘It was a pleasure to work with Darren and his team to develop the bespoke blue-light conversions on the XC90s. The XC90 has proved the perfect choice due to its emergency specification, uprated payload, brakes and chassis, not to mention the car’s standard safety equipment which keeps the team safe while they are performing their critical duties.”

Each vehicle carries the same advanced medical equipment as you would find onboard the helicopter, enabling the medical team to deliver the same treatments to their patient at the scene regardless of whether they arrive by helicopter or car. This includes clinical equipment such as ventilators and LyoPlas used to treat patients with severe blood loss.

As part of the development of the CCCs, DAA paramedics have undertaken Level 3 Ambulance Response training, also known as ‘blue light’ training, to provide them with the skills to drive the CCC safely, whilst travelling quickly to reach their patient in their time of need.

It's thanks to kind supporters that in Devon, we have peace of mind knowing that this incredible life-saving service is on call, every day of the year, to assist our friends, families and loved ones whenever they are needed. If you feel you can lend your support by donating to your local air ambulance service, visit www.daat.org and make a lifesaving difference.