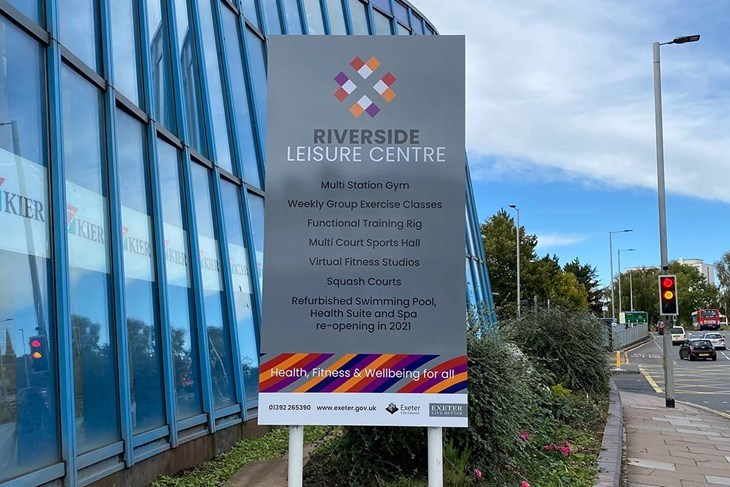 The swimming pool at Exeter’s Riverside Leisure Centre is set to reopen this summer more than four years after a fire, Exeter councillors have been told.

After a massive rebuilding programme, the construction programme is forecast to be completed subject to any further delays caused by the covid pandemic.

The pool has been closed since February 2017, although the gym and sports halls were able to reopen later that year. While the fire damage was being repaired, serious structural weaknesses unrelated to the fire were uncovered which had to be rectified to make the building safe.

Cllr Duncan Wood, lead councillor for leisure and physical activity, said he welcomed the fact that the huge restoration work is getting closer to completion. He said: “It has been a very frustrating time for everyone and I am grateful for the patience people have shown while this crucial work has been taking place.

“Safety will always be our top priority and the major structural faults uncovered had to be fixed to make the building safe and to bring it up to required modern standards. The length of time this has taken is exasperating but the issues uncovered were significant and not easy to rectify.”

Councillors were told that following the fire, an inspection of the roof above the health suite revealed it would need to be completely replaced. Roof light glazing was also defective, and all panes needed to be replaced with 276 individual glass units.

During the internal works in the main pool hall, a significant area of corrosion was then discovered in the original roof well away from the fire area, and a decision was taken to replace the remaining areas of the flat roof over the main pool hall. This required a massive internal birdcage scaffold involving several kilometres of scaffold tube, thousands of fittings and hundreds of boards. An external scaffold was also required to provide a safe working platform before we could strip the roof and begin the reinstatement.

An investigation into the pool surround then revealed ‘worrying deterioration’ in the structural elements and it was shown that the deterioration was widespread and the entire poolside floor needed to be replaced. The design of the new floor was complex and workers had to manage unexploded ordnance surveys, tight working areas, variable ground conditions and the effects of Covid which prevented close proximity tasks.

The eventual solution involved the installation of several hundred metres of piling to support a lower concrete slab. This provided a stable base for us to construct channels to route the new pool filtration pipework, and form blockwork bays that could be mass filled with foamed concrete. The addition of a top concrete slab and screed provides a solid base for the new tiling.

With the extended programme a decision was made to invest further in the facilities and the team designed and procured an internal refurbishment for the changing village areas and first floor changing rooms, involving new tiling, wall cladding, cubicles, lockers and sanitaryware. This work could be carried out without delaying overall completion.

Work is currently progressing with the installation of the cubicle package in the changing village areas, with cladding and tiling works completed throughout. The health suite fit out continues, with the new steam room, sauna and spa pool are being fitted in the coming weeks. In the main pool hall, floor tiling works will be commencing shortly, and the installation of new acoustic baffles and wall acoustic material has just been completed.

New ductwork is being constructed around the base of the curtain walling and different flooring on the balcony and seating area will also be fitted in advance of the modern spectator seating installation.

Other works have also been undertaken to upgrade the plant serving the main and learner pools, alongside other mechanical and electrical engineering work to improve the future operation of the facility.

The fire broke out at the centre on February 21, 2017.  In total, 120 firefighters, 17 fire engines and aerial appliances battled an “aggressive” fire throughout the night, which tore through the sauna and the swimming pool. It caused damage to surface coatings, mechanical and engineering plant areas, roof decking and structural elements, as well as smoke damage throughout the building.

The rebuild figure was between £15 million and £20 million, with additional costs for demolition, and the estimated total cost of the refurbishment was £8.4m, councillors in 2020 were told.