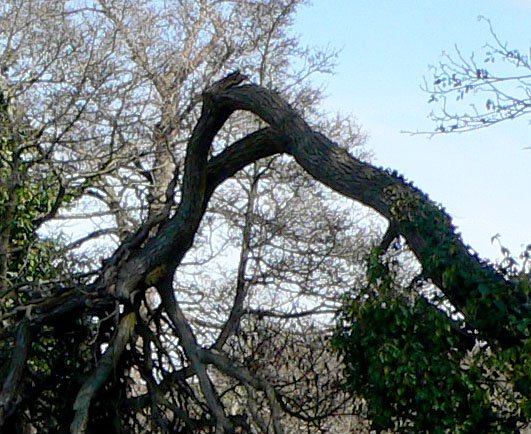 Storm Ciara chaos and clean up

One man is dead in Hampshire after a tree fell on his car on Sunday, and whilst fortunately, no deaths or serious injuries are reported in Devon as yet, the conditions continue to be atrocious. Winds have reached around 75 miles an hour; some flood alerts are in place near rivers, and some coastal areas are dangerous.

Extra highways crews from Devon County Council deallt with reports of more than 60 fallen trees and branches across the county. These included trees at:

- Four Oaks Road at Tedburn St Mary,
- Old Dawlish Road at Kennford,
- Goldsmith Lane in Axminster,
- Chambercombe Lane in Ilfracombe,
- A361 North Devon Link Road was partially blocked at Ash Mill,
- Exeter Road in Ivybridge,
- A386 between Okehampton and Hatherleigh,
- Abbotsham Road in Bideford,
- Tower Hill Road in St Giles on the Heath,
- Station Road in Bow,
- Clay Lane in Kingsteignton,
- Kerse Lane in Thurlestone and
- A399 near Brayford.

Roads were flooded on the A39 at Abbotsham Cross, Torquay Road and Station Road in Newton Abbot, the A377 at Hookway junction near Crediton, and North Road in Okehampton. There was also a landslip at Cross Hill, Netherton, near Combeinteignhead.

Taw Bridge in Barnstaple was closed to high sided vehicles for most of yesterday and Police requested part of the Esplanade in Sidmouth to be closed just before 7pm last night.

Councillor Stuart Hughes, Devon County Council Cabinet Member for Highway Management, said: “All areas of the county have taken a bit of a beating from Storm Ciara and the high wind speeds caused a huge amount of damage. With the combination of strong winds and persistent rainfall, we saw a number of trees down and flooding incidents. Thanks must go to our highways teams who were clearing trees and debris in horrendous conditions yesterday and they’re continuing their efforts today. There may still be some issues on minor roads that may not have been reported as yet so people still need to take care when out on local routes.”

Showers are expected overnight on Tuesday and they could be wintry on higher ground of Dartmoor and Exmoor. Road surface temperatures will dip just below freezing in widespread areas of the county and while Devon County Council’s gritting teams will be treating its main salting routes, there will be a risk of icy patches tomorrow morning, particularly on untreated roads.

In Exmouth the clean up has begun, with sand being put back on the beach.

After Storm Ciara an Exmouth wet and windy morning. East Devon's StreetScene out there doing what they do including putting the sand back on the beach. #Exmouth #EDDCbeaches #EDDCStreetSceneOps pic.twitter.com/suwAwobJnY