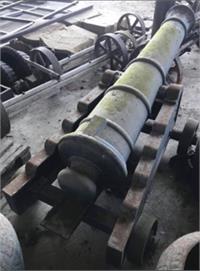 Cannons of this calibre unusual in Devon

Two  cannons said to have been used in blockbuster film Pirates of the Caribbean have been stolen in East Devon.

The one-and-a-half-tonne, cast-iron weapons were taken from a farm in Dalwood, near Axminster, between Thursday 28 May and Monday 1 June.

Officers investigating the burglary want to reunite the replica artillery, worth around £5,000, with their owner.

They need to identify a large, black recovery vehicle with a sheeted load that was seen entering the village at around noon on Monday 1 June. It is believed the seven-and-a-half- to ten-tonne truck had a chequered flag across the cab. It could have been heading towards the Seven Mile Straight or the A35.

The owner of the cannons was told on purchasing them that they had been commissioned for use on the set of Pirates of the Caribbean.

It's unclear what anyone would want with two replica cannons and it may be hard to get shot of them.

Anyone with information is urged to contact police by calling 101, or emailing 101@dc.police.uk, quoting crime reference CR/044198/20.

Information can also be passed anonymously to independent charity Crimestoppers by calling 0800 555111 or via www.crimestoppers-uk.org