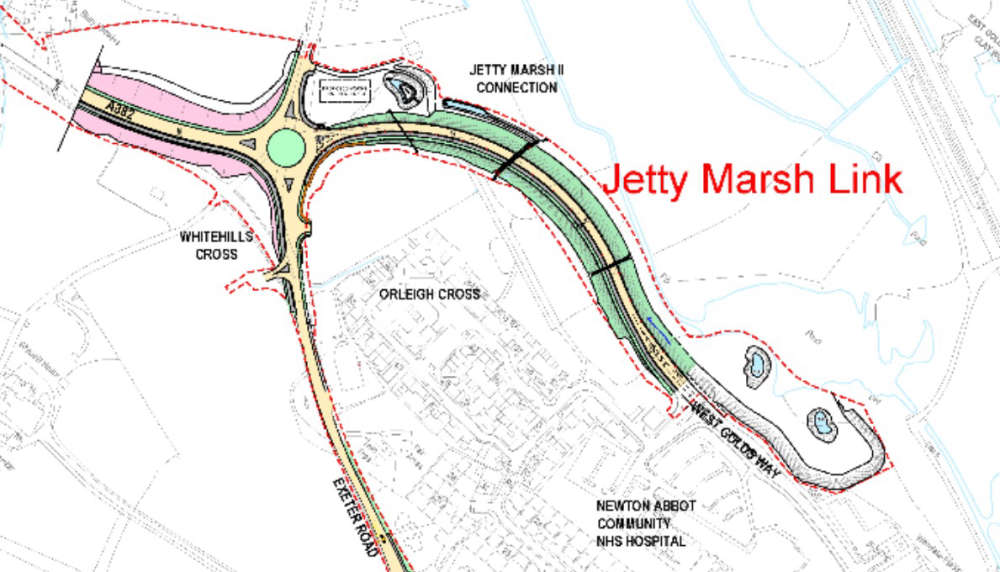 Funding has been approved towards a new link road between Newton Abbot Hospital and the Bovey Tracey Road at Jetty Marsh, despite opposition from some Teignbridge councillors.

The road will provide a vehicle, cycle and pedestrian route into the town, ahead of 135 new homes being built at the Berry Knowles development.

The £600,000 contribution from Teignbridge District Council (TDC) is part of the £6.7 million local contribution required from Devon County Council and Teignbridge for the link and the remaining improvements planned for the A382, between the hospital and Drumbridges roundabout.

Contributions that developers make to local communities through the Community Infrastructure Levy will cover the council’s share of the costs.

And through an agreement with developers Sibelco, the impact on the environment from the work will be reduced by extracting materials from the site to use in the development of the road, removing the need and additional costs of transporting it from elsewhere.

The Jetty Marsh Link road includes a new roundabout at Whitehill Cross and will improve access for people walking and cycling into the town or to the hospital, as well as reducing congestion for traffic.

Phase 1 of the A382 improvement programme between Forches Cross and Whitehill Cross was completed last year with Teignbridge contributing £5.1 million towards the £13.2 million cost.

Work on the first part of the Houghton Barton Link Road is nearing completion and £38 million has been secured from the government to upgrade the remainder of the A382 Drumbridges to Newton Abbot route.

At this week’s full meeting of the council, Councillor Gary Taylor (Lib Dem, Dawlish SW), executive member for planning said: “Ongoing upgrades to the A382 corridor have long been a priority [for TDC] and, despite the short-term pain that roadworks often bring, these improvements are a necessity for the efficiency of the wider road network in and around Newton Abbot.”

During a debate, Councillor Richard Daws (Newton Says No, Ambrook) told the meeting how, when the original work was carried out on the A382, he had felt “physically sick” when he drove down the road and “saw all the trees that were cut down.”

He asked if council officers could do an impact assessment of all the trees that had been felled, “and how that squares with the climate emergency and steps that are being taken to plant trees which, of course, takes tens and tens of years to actually come to fruition.”

Cllr Daw said he would be “more encouraged” if the council was taking steps to get people out of cars and to reinstate the Newton Abbot to Heathfield rail line, “rather than spending money on road improvements to the detriment of the environment.”

In response, an officer acknowledged the road improvement “isn’t a rail scheme” but said it would increase opportunities for walking and cycling, particularly between Whitehill and Newton Abbot town centre.

They continued: “At the moment we’ve got a corridor with very limited walking and cycling opportunities, and this will enhance those greatly, as well as scope for a new strategic bus corridor.”

The officer also pointed to the report which said Devon County Council is developing a carbon management plan for the improvement scheme.

Councillor Jackie Hook (Lib Dem, Bushell), cabinet member for climate change added: “We are still under government demands to build a certain number of houses and a large number of those houses will be built to the west of Newton Abbot.

“Therefore, we need to create the infrastructure that will provide for public transport and active and sustainable travel in the future. And of course it is a balance. It’s a balance in almost every decision we make.

“The biggest contributor to our emissions in Teignbridge is how we all travel around, and we need to put in the infrastructure to enable us to travel around by public transport, cycling and walking. And this is what this road does compared to the road that exists at the moment.”

Cllr Hook also claimed, while she supported a shift from spending money on road building into public transport, that “I would guess the public aren’t quite there with us at the moment” and they were “pro road-building.”

However, Councillor Liam Mullone (Newton Says No, College) disputed this, saying: “I have never ever heard a member of the public say, ‘I really want a road from A to B.’”

Cllr Mullone also claimed there was a lack of wildlife mitigation in the plans and that the local hedgehog hospital is “constantly full because of the roads, because of the traffic.”

“And for that reason, their numbers nationwide have depleted by half in the past 10 years.”

Councillor Phil Bullivant (Conservative, Bradley) responded: “Could I invite Cllr Mullone to come to highweek [a council committee] to talk to people who are desperate for the link between the A383 and the A382.”

The officer addressed concerns about wildlife, saying the county’s council project delivery board is “working hard on net gain and looking at different types of habitat planting required to mitigate the impacts of this scheme.”

Concerns were also raised at the meeting about the road leading to “rat run traffic” going past the hospital, how it would increase traffic, and a claim that it would be “built poorly.”

But a majority of members did vote to approve the financial contribution.