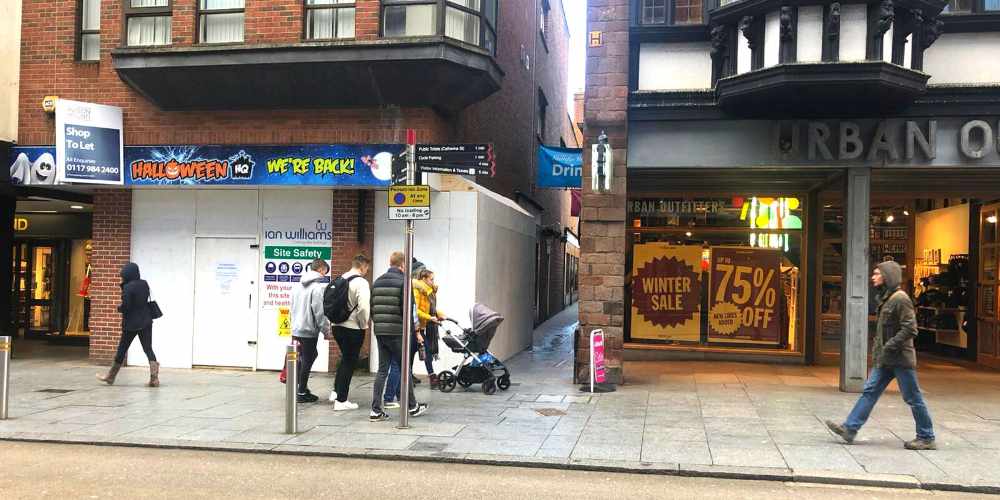 The building was previously home to Calendar Club

Business owners have raised fears that a new proposed café with outdoor seating with block off access to Gandy Street.

Previously home to short-term leaseholders Calendar Club and its off-shoot Halloween HQ, the scheme, a planning application submitted last Autumn would see the first planned permanent use of the 228 High Street unit since it was a Co-op bank.

The scheme, for a brand new two-storey café, would see the entire interior remodelled and the ‘curved’ exterior at the High Street would be squared off and completely replaced.

An outside seating area on the High Street pavement is also included as part of the proposals, which would see four sets of tables and chairs in line with the existing columns and ‘block it off’ as a public thoroughfare.

But business owners have been left concerned about how the plans would negatively affect the nearby Gandy Street, with all seven comments on the application objecting to the proposal.

“This will dissuade people from using this entrance to Gandy Street from the High Street. The implication of this is that it will reduce the footfall to the area which will be detrimental to all the businesses on Gandy Street.

“Given that Gandy Street is a marginal trading area at best and any fall in footfall is likely to push a portion of the businesses to the brink and result in further loss of businesses from Gandy Street, just as it’s starting to rejuvenate. I strongly object to these alterations.”

Louie Rivers said: “Gandy Street is already known as “Exeter’s hidden gem” and I believe making the entrance less obvious to the public will only hinder footfall.”

“The top part of Gandy Street is a major artery into the Street which is already very narrow and quite concealed. By Squaring off the building it is clear that this artery will be narrowed further and the entrance somewhat further concealed.

“There are many business on this street which depend upon the “accidental” footfall of shoppers who do not know that Gandy Street exists and by concealing its entrance further jeopardises one of Exeter’s independent and most loved streets.”

Kris Hewings said: “The junction of Gandy Street with the High Street is a very congested area and is also the main thoroughfare into Gandy Street. It is already the most narrow paces train part of the entire high street. It is my view that the proposed alteration to the shopfront would further reduce access into Gandy Street and would have a significant impact on access and the exposure of my business and the whole of the Gandys greet trading area

“The proposed outside seating of four tables each with two chairs would further congest the area of the High Street, which is one of the busiest parts of the street, Outside seating would also have the effect of “pushing” pedestrians further away from the entrance of Gandy Street further compounding the negative affect of the development.”

But Devon County Council’s Highways department has said that no highways reason for refusal can be made. In their consultee response, they said: “The area where the tables and chairs are to be placed is not on the public highway and is on private land. There is a footway on the other side of the canopy where there is an area for pedestrians to walk around the proposal, albeit not being on the desire line. It is therefore on this basis that a highway reason for refusal cannot be made.”

A planning statement with the scheme states: “The intended occupier would sell hot and cold drinks for consumption on and off the premises, along with sandwiches, other cold food and confectionary.”

It also adds that there is a demand for cafe/restaurant units with the rise of “café culture” in the city.