Cranbrook: the town without a centre

A field without a town

But things could change

The houses in East Devon's newest town have been up now for years. So has the school and community centre. So has the pub. But most towns have a town centre. That's yet to happen for Cranbook, but that's set to change.

Residents are now being asked to have their say over how they want the town centre to be developed. Two competing outline schemes have been proposed with East Devon District Council’s strategic planning committee set to decide between them.

The Cranbrook consortium of developers have outlined plans, with the aim to deliver the majority of the scheme by the end of 2021.

An alternative proposal would see a masterplan is more ambitious, and includes a leisure centre and a hotel, but would take longer and without the guarantee of being delivered.

Cllr Les Bayliss, chairman of Cranbrook Town Council said: “The discussions which are taking place include an identified supermarket provider but if the consortium’s proposals are not taken forward, that provider would fall away and there would be a need to wait for another to come forward. The situation is finely balanced and requires a significant decision to be made.

“There is a chance now to deliver a comprehensive and holistic town centre in the near future – or wait for another number of years before anything is delivered, if at all. Over the next few days and weeks the Town Council will be sharing more details about the two proposals, and residents are invited to comment and, most importantly, to vote in our Facebook poll.”

The proposal from the consortium of developers includes:

A 2,500 square metres Morrisons supermarket with an additional 1,000 square metres of retail space on Tillhouse Road (around 10 to 12 shops);
A town square
A nursery
Around 350 town centre homes
Town hall with café, meeting spaces and around 15 rentable office units (including land and around one-third of the construction costs)
Children’s centre, youth centre and library in a single building (including land and the construction costs to the Section 106 value)
A skate park
Land for extra care facilities delivered by Devon County Council
Land for a “blue light” facility to house fire, police and ambulance services
Opportunities to provide additional retail outlets
If this proposal is accepted by the Strategic Planning Committee, a planning application is expected to be submitted very soon with construction work going ahead within the year and the supermarket, shops and town square to be delivered during 2021.

Devon County Council have already put forward outline plans for a new community building for the town, just off Tillhouse Road and Cedar Closewhich would include a library, children’s centre with public nursing provision and a youth centre with outdoor recreational space.

The other approach being considered is essentially a masterplan covering the town centre development and would include very similar facilities to those listed in the consortium’s proposal above as well as some workshops and light industrial units, a hotel, and possibly a leisure centre, although the final detailed plans have not been made public.

A Cranbrook town council spokesman said: “There is a choice between delivering a range of town centre facilities now. Or an alternative approach which seeks to deliver a more ambitious town centre at some undetermined time in the future without certainty over what can be delivered, how it’s going to be funded and how long it’s going to take.

“The masterplan proposal might deliver a more ambitious town centre, but we don’t know how long it would take EDDC to develop the town centre masterplan, there is no funding for those extra items and no timescale for delivery – it may take five years, possibly ten, or even longer and there is no guarantee that anything will be delivered at all. The consortium is not obligated to provide these extra facilities and the process would rely on take-up from other potential investors.” 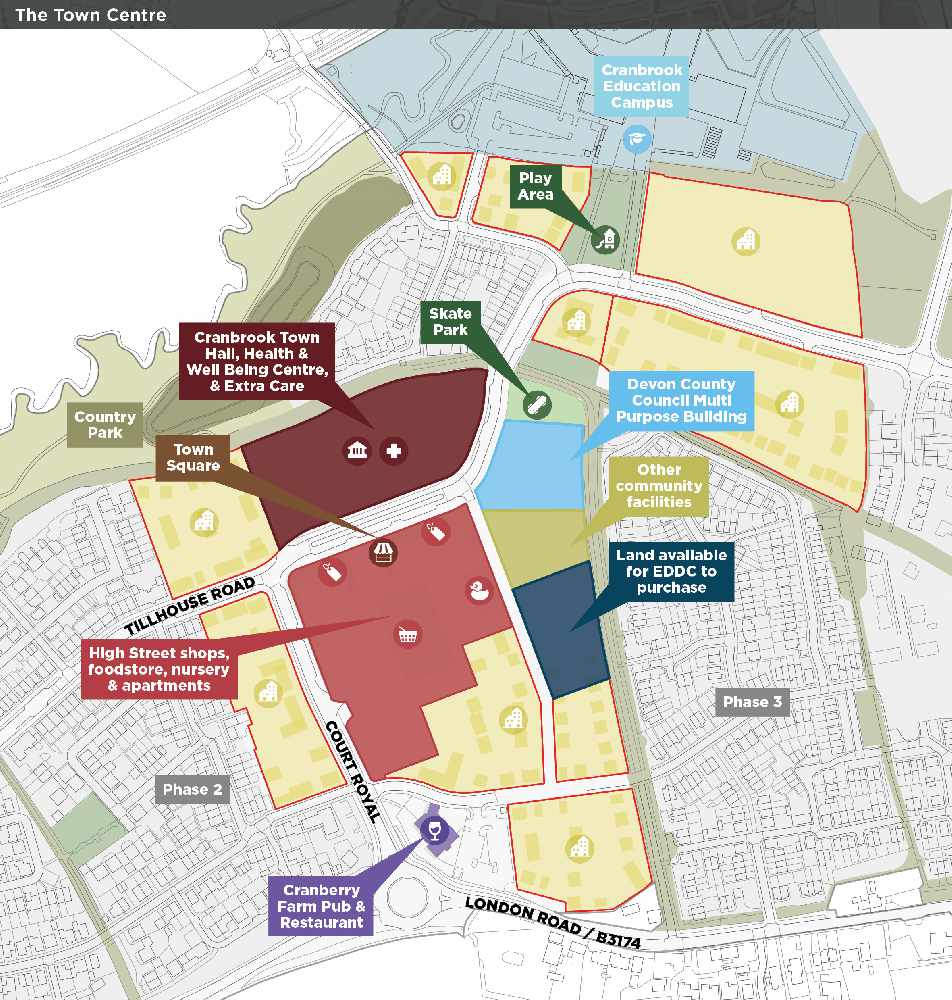