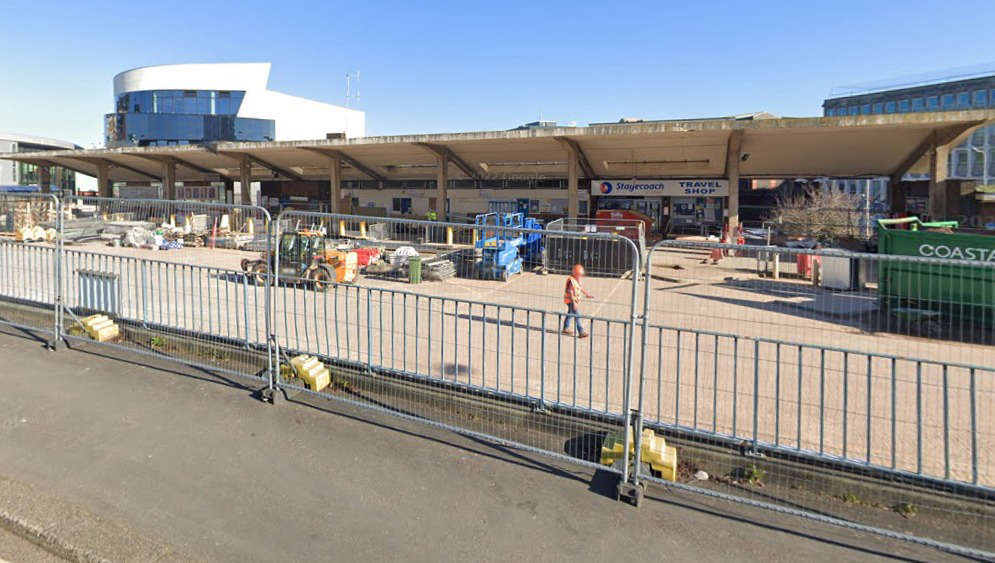 The site could be a 'major asset' it's claimed (image courtesy: Google Maps)

'Interim uses' until something permanent is built

The site of Exeter’s former bus station can become a ‘major asset’ once it has been demolished, the city council leader says.

Councillors this week rubber-stamped the £900,000 flattening of the old transport hub on Paris Street, which is now obsolete after work finished on a replacement bus station and the adjoining St Sidwell’s Point leisure centre.

The site forms part of the ‘CityPoint’ regeneration proposals agreed in 2019 to redevelop the wider area, including parts of Paris Street and Sidwell Street. Progress on this has been slow – not helped by the pandemic.

With that project likely to take several years, the council is keen to utilise the area for what it calls “interim uses” in the meantime, which could include an outdoor market.

Updating councillors this week, leader Phil Bialyk (Labour, Exwick) said: “I want us to do something with it. I want to engage the business community, local councillors and the community to see what we could put in there.”

He added: “We’ve got an opportunity to bring forward something that could be imaginative for the community, and I want to work with the councillors on how we can bring that forward for the benefit of the city.

“I think it could be a major asset, and to a degree a bit of an income source for us as well at the same time.”

A bid is being made to the government’s levelling-up fund to pay for the demolition work. If unsuccessful, the council says it will fund it through extra revenue generated from the recently acquired Guildhall Shopping Centre.

But Conservative councillor Peter Holland (St Loyes) questioned whether it was sensible to go ahead with the work until the council gets confirmation of the levelling-up funding. He also said extra money coming in from the Guildhall was an “assumption.”

In response, Cllr Bialyk – a former bus driver – said the £900,000 had already been set aside and that, through improving and ‘de-risking’ the site, its value will go up.

Councillors were told the site could become available for new uses within a year.