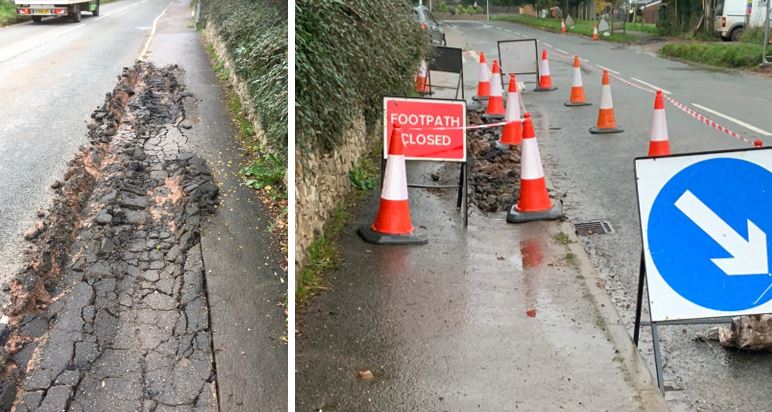 A 16 home development's currently being built nearby

A pavement near a new housing estate in Colyton is being ‘continually destroyed’ by lorries.

The Saxon Meadow development, taking place on Coly Road, would see 16 homes built on land next to the Peace Memorial Playing Fields.

But as a result of lorries delivering to the Saxon Meadow housing development, the pavements have been churned up and become unusable.

Devon County Council’s highways department had cordoned off the pavement and created a temporary pedestrian access via the road, but in doing so, did not include a drop curb.

One Colyton resident said: “My wheelchair-bound mother lives in Colyton and her only route out of her house into town is via the pavement near her house.

“This pavement is continually being destroyed by lorries delivering to the Saxon Meadow housing development.

“This week it has been churned up so badly, it has made the pavement unusable, and virtually rendered my mother housebound as a result.

“To make matters worse, Highways have been out to cordon it off and create a temporary pedestrian access via the road, but they have managed to include zero drop curb access, meaning she would need to have her wheelchair literally in the middle of the road to get through.”

In response, a Devon County Council spokesman said: “Contractors were repairing the pavement yesterday, it should now be repaired. We apologise for the inconvenience this has caused.”