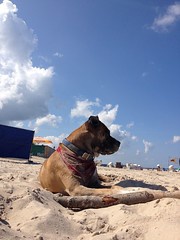 They can't go in 180 parts of East Devon

Public Space Protection Orders (PSPOs) that gave East Devon District Council added powers have been extended for three years. That's despite some calls for dog-bans to be suspended during the coronavirus crisis. The rules don't allow suspension.

The PSPO, now running to May 2023, restricts dogs from sections of beach at Exmouth, Sidmouth, Beer, Budleigh Salterton and Seaton. As well as the summer dog beach ban, there are more areas where dogs must be walked on leads and new exclusion areas where they're not allowed either. The ban extends the area covered by the previous three-year order that ended this Saturday. So dogs can't now go on named beaches down to the mean low tide level and they're prevented from going into 15 more play parks. It means there are now 180 areas across East Devon where dog controls are in place. The council isn't ruling out going further too, and stopping people walking dogs at council-owned sports grounds.

Anyone found guilty of breaching the PSPO by providing or putting food down for seagulls on the promenades, beaches or foreshore, faces being issued with a fixed penalty notice for £80. Dog-fouling and reports of worries about seagulls have gone down in East Devon in the past three years, the council says.

Restrictions on certain anti-social behaviour in areas of central Exmouth and Sidmouth have also been extended. You can't drink alcohol, urinate in public, make aggressive requests for money, or intimidate people - even though some of those acts are covered by existing laws. Areas covered by the ban include The Esplanade and Market Square in Sidmouth, and the Strand, the Magnolia Centre, the Station car park, Manor Gardens, and The Plantation in Exmouth.

The initial PSPO was due to expire this weekend, but in a consultation many respondents says they didn't want standards declining. Cllr Geoff Jung, portfolio holder for environment, said: “I’m really pleased on the success of the previous orders, which resulted in our streets, footpaths and open areas being cleaner than for many years, as most of our residents and visitors are doing the right thing, particularly on and around our beaches, because they understand the benefits of these controls.

A council spokesman added: “Additional areas can be added into the orders during the next three years and it is likely that this might include banning dogs from some more of our sports pitches, but adding any new areas cannot be done without a full local public consultation.

“The council also must consider the view of the many members of the public who like to come to the beaches without worrying about being bothered by dogs. Therefore, suspending this part of the order would have no effect, and would lead to confusion when the lockdown is relaxed or lifted.

“A particularly successful control has been the one which requires all dogs to be on leads on roads and pavements, and this has led to a decline in incidents where dogs worry walkers, runners and cyclists.”