By Daniel Clark and Adam Manning 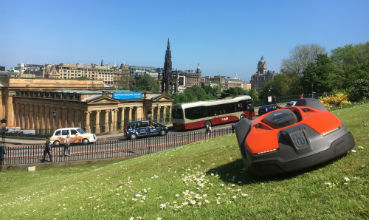 A big screen in The Strand in Exmouth and lots more is to be introduced.

A whole raft of projects and plans have been revealed in East Devon District Council’s Draft Service Plans for 2019/20 that are designed to raise income for the council, balance its budget, and to run its services.

The draft budget, in line with the agreed Financial Plan, assumes the council will increase the Council Tax for 2019/20 by £5 a year, a 3.7 per cent increase, meaning that the annual council tax charge will rise from £136.78 to £141.78 for a band D property a year.

The budget has been prepared to maintain council homes to a high standard with a comprehensive planned programme of expenditure, adaptations and routine repairs.

Major repairs totalling £4.4m covering new doors, boilers, kitchens and bathrooms, including change of tenancy expenditure, replacement of wooden fascias with uPVC and roof replacements are included, as are day to day repairs, programme maintenance and one off works totalling £4.5m.

The Local Democracy Reporting Service takes a look at some of the projects mentioned in the service plans.

The council aims to deliver a fixed big screen on the Strand in Exmouth, using the Strand redevelopment reserve, giving them the ability to run local advertising, council promotions and messages as well as screen large scale events such as Wimbledon, Concerts and Proms.

A spokesman for EDDC said the council is in the ‘early stages’ of the project which is subject to securing planning consent. It is hoped the idea can go before the council’s cabinet in spring.

The council’s Economic Development team will once again run a Gate to Plate food festival in Honiton. The festival will provide another opportunity for local food and crafts traders to showcase the best of East Devon in a one day street festival. The 2018 festival was attended by Prince Charles and the Duchess of Cornwall.

East Devon District Council is set to conduct a trial of robot autonomous mowers to assess their viability, at a cost of £40,000. Studies from elsewhere and manufacturers information shows that cost savings of 20-30 per cent where they can be utilised.

When they were trialled in Edinburgh, the new mowers increased efficiency and allowed staff to concentrate on horticultural activities elsewhere, improved safety on steep grass verges and a positive impact on the environment thanks to their use of battery operation.

All mowers, which are operated using a special smart phone app, are pin-protected and are fitted with alarms and technology to disable should they be moved without authorisation. To ensure public safety, sensors detect any nearby objects, including people and animals, causing machines to turn away.

A public consultation is set to be carried out on car parking fees and charges in July. The report says most charges have not been increased since 2010, so they test the public response to proposals to increase the charges in some of our car parks where spaces are now hard to find because demand exceeds supply.

But the council also will explore introducing more regular evening enforcement patrols of car parks and ending the discrepancy where some car parks charge between 8am and 6pm and other charges 24 hours-a-day, but introducing 24 charging to all car parks.

The report also added that they do plan to develop several existing car parks. Manor Road and The Ham in Sidmouth will get an increased capacity, as will Coombe Lane Car Park in Axminster and the Seaton Jurassic car park, while they will work with Lympstone Parish Council to identify additional car parking capacity within the village

The council plans to continue the progress the Queen’s Drive redevelopment opportunity in Exmouth by complete the realignment of the road and the car park, facilitate for Grenadier Estates to begin building the watersports centre, and to take forward the findings of the HemmingwayDesign visioning exercise through to a commercially viable and deliverable new development for phase 3.

Work with the Cranbrook Consortium of developers to promote and enable the development of Cranbrook Town Centre in a way that secures a sustainable economy within the town and meets the community’s needs will take place.

The council will also support the development of the concept of a Health and Wellbeing Hub in the town and to develop a business case for investment in key facilities in Cranbrook to help bring forward a vibrant town centre, with a report set to come to the cabinet in March.

The trail will be a 13km (eight mile) commuting and recreational trail for walkers, cyclists, mobility scooters and where feasible, horse riders.

Planning permission to change the use of land to construct 1.1km of the trail on agricultural farmland from Winslade Park in Clyst St Mary down to Kenniford Farm was approved last year, for a section that will form part of the estuary link trail that will run from Clyst St Mary to the estuary trail at Dart’s Farm.

The council aims to work to maintain a recycling rate of 60 per cent so it becomes their annual rate, enabling them to be in the top 10 Local Authorities in England for recycling. The chargeable green waste collection service is set to expand, with the customer base growing from 9,000 to 13,000, which should generate an extra £96,000 of income.

The report says that since the last changes to the recycling service in 2017, 90 per cent of people are satisfied with the recycling green box collection and 83 per cent are satisfied with the rubbish bin collection service, after moving to three-weekly collection. It adds: “This really shows the success of leading with the improved recycling service, meaning residents can cope with their rubbish being collected every three weeks, as so much waste is now able to be recycled.”

The big belly bins on Seaton, Sidmouth, Budleigh and Exmouth seafronts will have to be replaced as the leases are coming to an end in the next 12 months.

An £85,000 bid will be made to identify a replacement for the bins and to implement suitable alternatives and improved emptying logistics, including bin lifts. The leases for Seaton, Sidmouth and Budleigh end in May 2019, while Exmouth’s ends in May 2020.

The next stages of the Sidmouth and Seaton Beach Management Schemes are set to be delivered, while investigations into the scope of works required at Exmouth beach to recharge/manage the amenity as set out in the Exmouth BMP for the 2020s will start.

A full project appraisal and business case to either deliver new workshop units at Colyford Road, Seaton & Fosseway, Seaton, or to use the land for alternative proposals will be produced by the property and estates teams, while a strategy for the Moridunum in Seaton will be agreed, with a decision to either dispose of the asset or retain it and develop it in a way that will enhance the seafront.

The council’s cabinet will have to agree to any proposals, which are due to be present early in 2019/20.

The team will also continue to work with colleagues in Planning and Property Services to support efforts in Axminster to bring forward renewal of vacant town centre sites or underdeveloped sites.

A review of public toilet provision in East Devon will be completed in a bid to make savings.  Background research and survey work was completed in 17/18, which included cost analysis and usage numbers, and which feed into discussions about how the council will manage the service going forward.

The council is planning to investigate the possibility of paid access at some ‘key sites’, while other options include leasing the toilets to private businesses for them to run.

The joint overview and scrutiny committee meeting, which takes place on Wednesday, January 16, will discuss the draft service plans for 2019/20, as well as the draft revenue and service budgets, and make any recommendations to full council to decide on at the meeting on February 27.