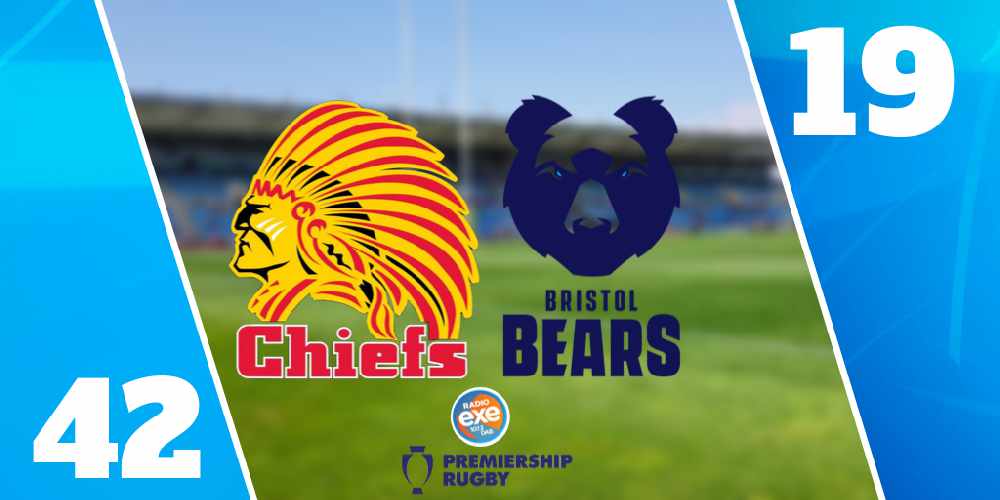 Exeter Chiefs hosted West Country rivals Bristol Bears at Sandy Park in final game of the group stages of the Premiership Cup, knowing that a bonus point win would guarantee themselves a place in the semi-finals.

The Chiefs couldn’t have wished for a better start, when with less than 2 minutes on the clock, Olly Woodburn offloaded brilliantly to Jonny Hill, who cut inside the Bristol full back, to dot down just to the left off the post. Joe Simmonds added the extras, giving the Chiefs a 7-0 lead.

The Bears hit back straight away however, when in the 6th minute, a perfectly waited cross field kick from former Ireland fly half Ian Madigan found the winger, Jack Bates, who dived over in the left-hand corner. Madigan hit the post with the conversion, leaving the score at 7-5 to the Chiefs.

Exeter didn’t take long to re gather themselves, and two further tries for the Chiefs were to follow in quick succession, with Jack Maunder and Sam Simmonds both crossing with close range efforts, in the 12th and 19th minute respectively.

The Bears again responded in the 23rd minute however, when Max Bodilly’s kick was charged down by his opposite number Tom Pincus and the Bristol full back only had to dive on the ball to score. Madigan was this time successful with the boot, reducing the Chiefs lead to 21-12.

The Chiefs bagged themselves a bonus point try in the 32nd minute, when in a style the Chiefs fans have become accustomed to, the giant frame of Harry Williams bulldozed his way over from a meter out, providing Exeter with a seemingly unassailable 28-12 lead at the break, after Simmonds was again faultless with the boot.

The Chiefs stuttered at the beginning of the second half, however they eventually broke Bristol’s resistance in the 60th minute, when man of the match Dave Dennis inched his way over after a clever quick tap penalty from replacement number 8, Matt Kvesic.

The visitors to their credit never gave up, and the impressive Capon deservedly went over from a well set up driving maul in the 65th minute with the conversion again being added by Madigan.

The Chiefs managed to find a 6th try in the 77th minute, when once more concerted pressure on the Bears line, led to a heavy weight forward barging his way over. This time it was replacement prop Marcus Street. The conversion was once more successful, this time from replacement fly half Gareth Steenson, in what was a prefect kicking display from the Chiefs.

The final scored ended Exeter Chiefs 42 – Bristol Bears 19, in a performance which will no doubt please Director of Rugby Rob Baxter going into the start of Premiership season next weekend, when they face Harlequins at Sandy Park, whom they will also face again in the Premiership Cup semi-final in February at the same venue.