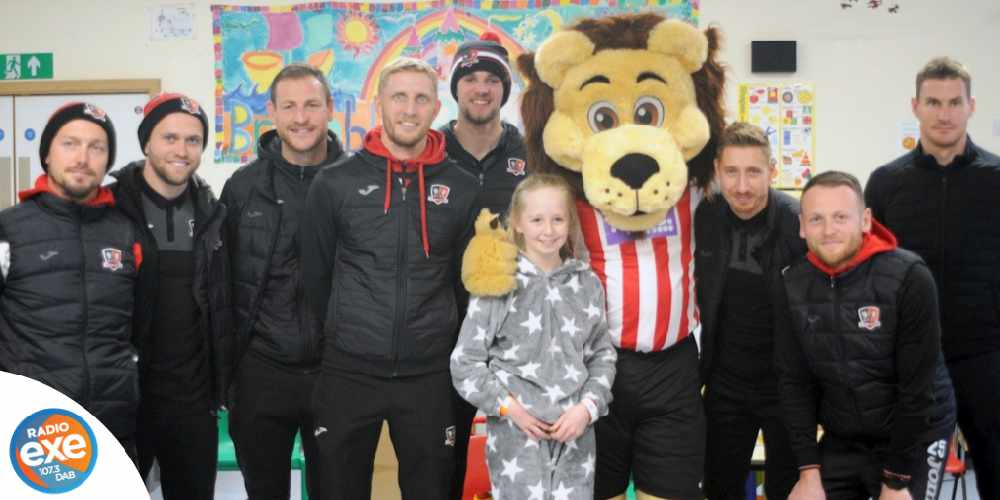 There were some special festive visitors to the RD&E’s Bramble Ward when Exeter City FC’s first team players took time out of their training schedule to­­ drop into the hospital.

The players brought some Christmas magic and dozens of bears, toys, footballs, signed merchandise and Christmas stockings to the young patients who are sadly spending the festive period on the ward.

The group visited the youngsters and spent some time chatting with them and their families. There was also a chance to meet the staff and hear about the work they do on Bramble Ward.

It was a particularly poignant visit for player Lee Holmes, whose daughter Lila was treated on the ward when she was taken severely ill with pneumonia earlier in the year. Lee was so impressed and moved by the treatment of his daughter that he and his family held a bucket collection for the ward at St James Park, raising £900. Donations for the visit were kindly provided by Build a Bear, Exeter City Club Shop, Supporters’ Trust, and by supporters leaving gifts in the club shop.

Exeter City chairman and director of football Julian Tagg said: "As a supporter-owned football club our role in the community is hugely important and the players are always keen to show their support and visit the hospital.

"We’d like to thank Bramble Ward for allowing us to visit and hope that seeing and meeting our players would bring some Christmas cheer to the children who are sadly spending the festive period in hospital. We’d also like to thank everyone who so generously donated gifts.’"