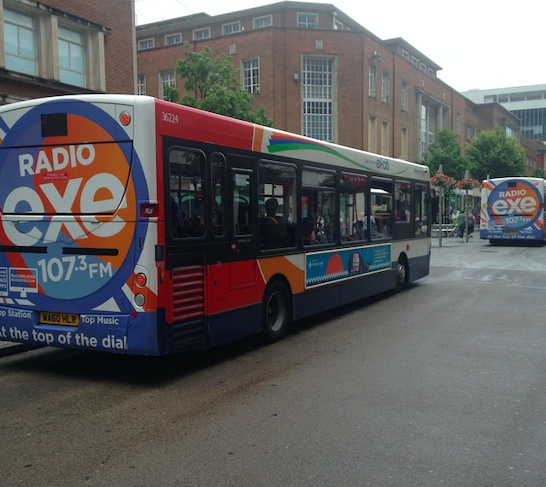 Could buses be banned in High Street?

Just days after Exeter's Green Party called for road space to be reallocated to pedestrians and cyclists, the leader of the city council has said the central Exeter could be made car-free. The council's signed up to plans to be a carbon-neutral city by 2030; an ambition that's slipped back five years, and will be taking part in an online conference on Wednesday organised by Exeter City Futures, the hybrid public-private sector body driving the initiative (excuse the pun).

Cars have been banned from the High Street for years, but pedestrians still have to navigate a path between buses. Now Cllr Phil Bialyk suggests the area could be widened and some streets could become car-free on certain days or times. But he admits that the proposal throws up lots of questions that he doesn’t yet have the answer to and are only feasible if alternative transport methods are put in place. “I would like to lay a marker down and I would like to the see the city centre area car free. That raises questions and we’ve got to look at what this would mean, but shouldn’t we start that debate about what is and is not necessary and what it means for the people.

“Something like Paris Street – that’s little more than a rat run for people traversing the city to go through it and we’ve got to stop that. We’ve got to look at it and do proper studies but I do know there is a marvellous opportunity for us and we have to seize it. I don’t know what it looks like but we have to take the chance to look at it.”

Devon County Council has announce temporary measures that will support social distancing for walkers and cyclists and could see one-way streets introduced and new cycle lanes created. Parking spaces would be removed in order to widen footpaths and introduce cycleways in Fore Street, South Street and North Street, while among other proposals are the possible introduction of a one-way system in Magdalen Road, a bus/cycle route in Cowick Street and improvements in residential streets between Newcourt to the city centre via the RD&E, and from Sowton to the city centre via Heavitree.

One thing Cllr Bialyk, himself a former bus driver, would like to see, once social distancing measures have been relaxed, is the bus service become more reliable, faster, and a convenient method for getting across the city. “When I drove a bus you could get from Whipton Barton to the High Street in nine minutes. The High Street to Higher Barley Mount in 11 minutes and still have time for a fag at the end. That’s because there was no traffic, but cars gets in the way of buses,” he said.

“All people want to do is get on a bus and get there, but they don’t want to sit in traffic, so it is about the speed of journeys. I would like to be able to join a bus anywhere in Exeter and travel to city centre in 30 minutes, which is an acceptable journey time."

He says roads may not be wide enough for specific bus lanes, unless you exclude cars, taking him back to the idea of a car free zone, and that he’d love to see an all-electric bus service within Exeter. But while car free zones or an improved bus service may help tackle congestion within the city centre, people still have to travel to Exeter and will still need vehicles. “Once it comes to be socially acceptable for cities to exclude cars from busy areas, we may need to think about that, providing there is an alternative for people to travel most of the way. You can’t ask someone from Okehampton to cycle in to Exeter but if you reopen the railway line, that gives them an option.

“Or someone from Doddiscombleigh as an example. You are not going to get them cycling or walking into Exeter for work. It ain’t going to happen, and won’t get buses every 10 minutes either, so they are going to drive. But if we can get them in a fuel efficient car driving to an area to park somewhere and use quick public transport into the city centre in a time no different than if they drove, that’s a start. We need people to access the city through park-and-travel sites, bike hubs, electric scooter hubs, or to cycle in, using a quick and fast efficient transport at a reasonable cost. If people gave good alternative choices then you can start having restrictions and create behaviour change, but you cannot just get the change and exclude cars without putting an alternative in.”

Exeter used to have a tram network that ran through the city, but Cllr Bialyk doesn’t think there was likelihood of it ever returning. “I love trams, but have we got the finance, the road capacity and widths and the way the city is designed, to have trams? We used to, but they were very limited in where they went,” he said. “I would love to see trams and how lovely it would look, but we have got to think about it.

“They’d be a lovely thing and if we were building SIM City on the computer we’d put them in first, but Exeter is built on a medieval structure and I don’t think we can do it now.”

He added that trams would struggle with some of the tight turns they would need to make, they would only be able to serve limited parts of the city, and it would be far more preferable to get a more agile bus service to drop someone off a minute away from their destination then a tram 10 minutes away.

Cllr Bialyk added: “People won’t just sit at home and nor will they want to when the economy does come back and there will still plenty of reasons for people to come into Exeter. St Sidwell’s Point [a new leisure complex on the site of the old bus station on Paris Street] is progressing nicely and it will be an icon of the city.

“We have got a lot to do and we have to start talking about things and some possible difficult solutions, such as a possible car free centre. But what that centre is, what it looks like and how it is applied is something we need to debate if we plan to achieve carbon neutrality.