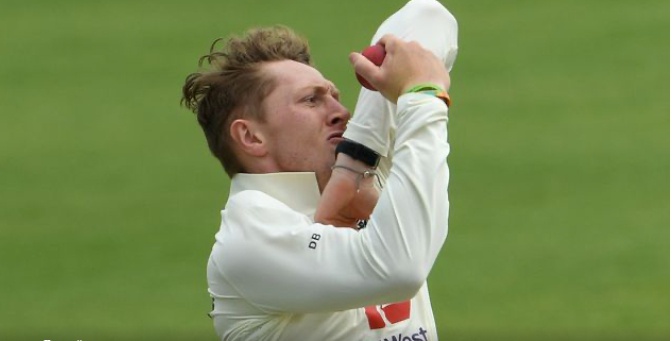 Dom Bess has been named as England's sole spinner in a 13-man squad for the first #raisethebat Test against West Indies at The Ageas Bowl.

The 22-year-old has won the battle with Somerset team-mate Jack Leach and Moeen Ali for the slow-bowling berth he regained over the winter due to Leach's illness and Ali having taken a break from Test cricket.

Leach has been named as one of nine reserves for the match, while Ali - who has not played a Test since August - has been left out entirely.

Jos Buttler will keep wicket in the series opener - live on Sky Sports from 10.30am on Wednesday - with Jonny Bairstow omitted and Ben Foakes only named as one of the reserve players for the game in Southampton.

Denly, 34, has been retained despite averaging just 30 in his 14 Tests to date and not yet hitting a century - his highest score so far is the 94 he struck in the final Ashes Test against Australia at The Oval last summer.

England have named five seamers, in addition to Stokes, with James Anderson, Stuart Broad, Jofra Archer, Mark Wood and Chris Woakes vying for places in the starting XI against West Indies.
Leach and Foakes are joined on the reserve list by all-rounder Sam Curran - who has tested negative for coronavirus after falling ill - and seamers Craig Overton and Olly Stone, as well as four players uncapped at Test level.

Root, Bairstow, Moeen, Lewis Gregory, Jamie Overton, Amar Virdi, Keaton Jennings and Matthew Parkinson are the eight players that filled out England's initial training group of 30 not to be named in either the 13-man Test squad or nine-man reserve list.