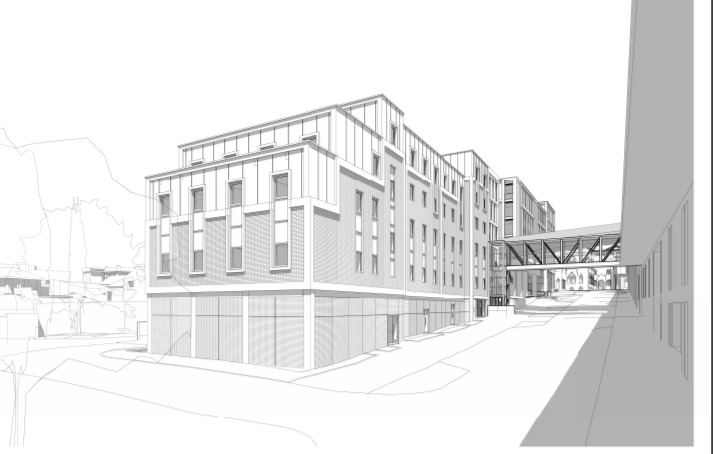 But buildings not as tall as previously planned

Plans to redevelop Exeter’s outdated Harlequin Centre on Paul Street in Exeter city centre have been revised again with the removal of top floor accommodation.

Developers Curlew have for the second time submitted changes to their scheme to convert the shopping centre into a ‘co-living’ scheme, thought to be the first in the south west, as well as seeing a hotel with a bar and restaurant constructed.

The changes come following further discussions with officers of the council and notably representatives of Historic England and by removing further areas from the buildings to reduce their height, addresses some of the points raised by the hundreds of objectors to the scheme, the developers say.

In a covering letter explaining the revisions to the scheme, the applicants say: “As we have done throughout the process, we have listened to comments and made amendments where possible to reflect concerns. The removal of the top floor level from both Block 2 and the rear section of Block 1 helps to provide an improved transition in height between the new development and the St David’s and Central Conservation Areas resulting in a scheme which improves its response to the natural topography with both blocks stepping down in height along Paul Street towards the Iron Bridge and North Street.

The statement says that the scheme will also see the creation of a pocket park, significant improvements to the urban realm of Paul Street, reducing the presence of the car and enhancing the environment for pedestrians and cyclists, provision of over 200 cycle parking spaces within the buildings and within the public realm and the replacement of the pedestrian bridge over Paul Street with a modern, lightweight bridge, reducing impact along the street as well as retaining access.

Greg Fox, senior development manager at Curlew said: ‘’We are confident that Exeter will recover quickly once we are past the current crisis, and schemes like ours will part of the catalyst for getting the economy back on track by providing jobs and new housing for key workers. We want to start work as soon as we can secure a positive planning consent.

‘’With the help of our colleagues from Exeter City Living, and in accordance with Curlew’s commitment to sustainable development, we are delighted that the revised co-living elements of the proposals will be constructed in line with Passivhaus principles. This would be our first Passivhaus development and we hope it will act as a trailblazer for other developments in our national portfolio.’’