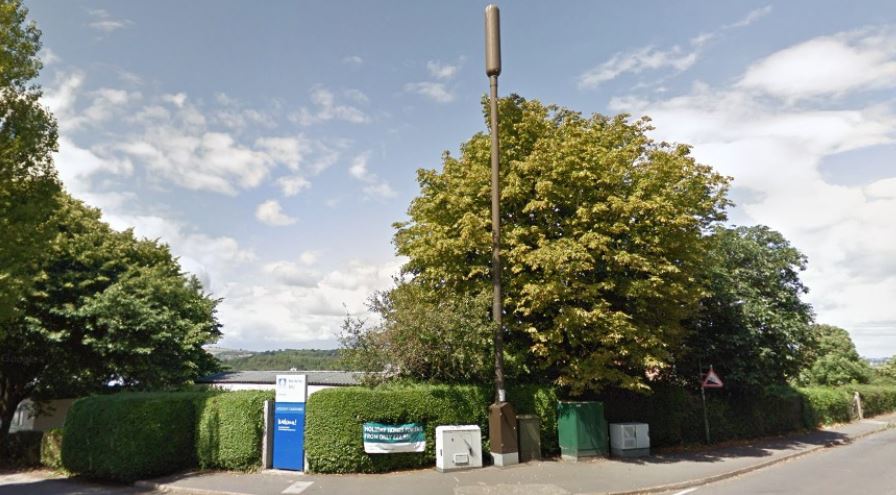 A plan to upgrade a phone mast site for the 5G network at the entrance to a holiday park at Paignton has been refused.

Torbay’s planning committee voted against the application because of the visual impact and perception of health effects of the technology which the park owners warned could damage the business.

The application on behalf of EE and Three was to replace a 13.5m pole with one 20m high and six replacement cabinets.

They wanted to put the new pole and equipment on the opposite side of road from the current installation at the entrance to the Beverley Holidays park in Goodrington Road.

The family-owned business objected to the plan and feared the “eyesore” new mast would put off visitors who might be concerned about the possible health effects of the 5G technology.

Councillors deferred a decision in November for othere locations to be considered.

Members of the committee were told on Monday that the developer had rejected four alternative sites.

But they had agreed that the cabinets would be coloured green and the mast would be mostly brown to match telegraph poles.

Claire Flower, a director of Beverley Holidays, objected to the plans and said the owners were extremely concerned about the “detrimental effects” on the business of the large installation at the entrance to the holiday park.

She said the “imposing structure” would be an “absolute eyesore” and there was a concern about the perception of customers, as well as the potential for another increase in the size of the installation in the future.

Councillors were told that the health effects of the technology were not something they could take into account, but they could consider people’s perceptions and fears of 5G technology, although it would be given low weight at an appeal.

They were told the new installation would operate within international safety guidelines.

Conservative councillor Andrew Barrand said he was disappointed the developer had not been able to agree on one of the alternatives offered and appeared to be behaving “stubbornly”.

Independent Terry Manning said he was concerned that the mast might have an effect on visitors to the holiday park because of their fears of the health effects of 5G.

He said approving the application would set a precedent that developers could put new masts “wherever they want”.

Liberal Democrat Jack Dart said there was no evidence of harm to health and the technology was vital to develop the mobile network.

Liberal Democrat John Dudley said he would find it difficult to support a proposal that could harm a family business.

The committee voted five to four in favour of a proposal from Cllr Manning to reject the application.

The industry is rolling out the 5th generation of mobile phone technology promising faster downloads.

But the higher frequency signal does not travel as far so more base stations are needed and the masts are higher to avoid being blocked by buildings and trees.

Campaigners in Torbay have asked Torbay Council to pause the roll-out of the technology because of health concerns.

They say 5G technology has not been fully tested and studies on animals have shown a link to health effects including an increased risk of cancer.

Public Health England says years of studies of radio waves show the risk of damage to health is unlikely at exposure to levels below internationally agreed limits.