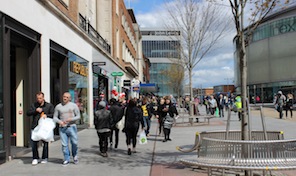 But businesses more positive than in April

Jobs in the Greater Exeter area could be severely hit by the coronavirus crisis once lockdown ends.

It's just one of the conclusions of a survey conducted by Exeter Chamber of Commerce, jointly with Exeter City Council, the Federation of Small Businesses and InExeter, the city centre marketing group that represents businesses in the city centre.

Other surveys suggest that Exeter could be relatively protected from the most harmful effects of the crisis, at least compared with other parts of Devon or similar sized cities. That's because many jobs in and around the city are in the public sector, with Exeter benefiting from large education and health sectors and the home of both a city and county councils.  But the new survey is gloomier for those working for private businesses.

Two-thirds (66 per cent) of respondents say they're impacted by covid-19, and of those 60 per cent reported the effects as severe - but that's down seven percentage points from a similar survey in April.  Less than three per cent of respondents experienced a positive effect on their business.

For workers in the private sector, the findings suggest there's a 50:50 chance that they or at least some of their colleagues could be shown the door.  Although half of business owners responding to the survey don't have plans to make redundancies, nearly a quarter (23 per cent) do and a further 28 per cent are considering job cuts.  Forty-five per cent of businesses who responded are in the retail and hospitality sector, including retail, bars, restaurants and leisure - the sectors still facing major restrictions on trading. Most (86 per cent) employ fewer than 20 people.

Jo Caine, board director of the chamber of commerce and managing director of recruitment firm Cathedral Appointments said: “While there are some extremely concerning results from the survey, that we know will result in further closures and redundancies, we are beginning to see businesses rebuild their sales levels and work out how to minimise job losses.  For employees and employers looking for advice, Exeter Chamber is running two focused web shows on this topic in July with advice for both employers and employees who are looking for their next opportunity.”

Commercial property values in Exeter could be in for a shock too. More than of businesses say that they don't need all their current space, with many planning to downsize or looking at shared accommodation.

Cllr David Harvey, lead city councillor of environment and city management, said: “This survey has given us important insight into the experience the business community is facing.  Exeter City Council will continue to work with businesses to address issues where possible.  One of the initiatives designed to help businesses come out of the lockdown is a new series of webinars to help businesses reopen.”