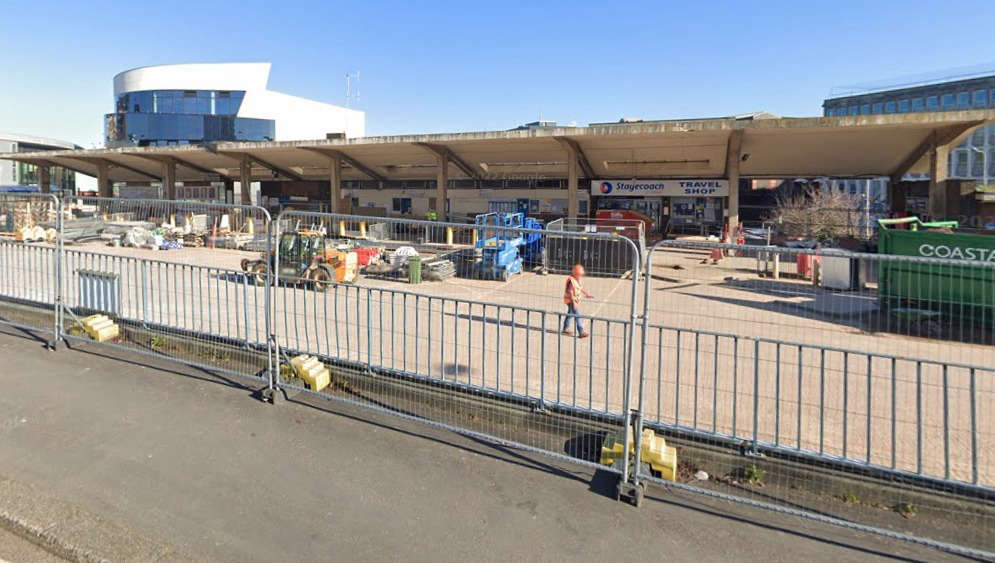 No decision has been made on its future use

Exeter’s former bus station is to be demolished at a cost of almost a million pounds.

First opened in 1964, the site became largely redundant last year when it was replaced by a new bus station a short distance away on Bampfylde Street, although parts were still being used during the construction of the new St Sidwell’s Point leisure centre.

A number of schemes for short-term use of the building and the surrounding areas were considered, but the city council says it will be “easier to deliver positive interim uses of the land once the existing building has been removed.”

Longer-term, the site forms part of the ‘CityPoint’ regeneration proposals agreed in 2019 to redevelop the wider area, including parts of Paris Street and Sidwell Street. Progress on this has been slow – not helped by the pandemic.

The council’s ruling executive approved the demolition at its meeting on Tuesday [5 July], with the high cost of £900,000 blamed on asbestos in the building.

A bid is being made to the government’s levelling-up fund to pay for the work. If unsuccessful, the council will fund it through from the recent purchase of the Guildhall Shopping Centre.

It says a vacant site will allow “a range of ‘meanwhile’ uses to animate the area” next to the leisure centre while future redevelopment is prepared. An outdoor market is one potential use, but no decisions have been made.

“The alternative approach will be to hoard and mothball the site,” a council report said. “This is estimated to cost around £150,000 as an upfront hoarding and CCTV costs with ongoing security costs of £20,000 per annum – and the continuing rates liability.

“This would also prevent our being able to explore the full range of meanwhile uses whilst the CityPoint scheme moves forward.”

Backing the plan, Councillor Martin Pearce (Labour, Duryard & St James) said the site “clearly sticks out as something that needs some progress on when you look around it.

“I’m really excited to see that there’s actually going to be some interim, meanwhile uses of the site to benefit from the increased footfall and the amazing connectivity of being next to the new bus station.”

The timescale is still being finalised but the council hopes to start work before the winter.