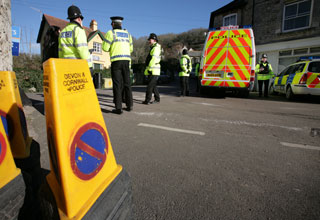 A 25-year-old man has been arrested on suspicion of attempted murder following a collision between a male pedestrian and a car in Foxhole Road, Paignton, on Tuesday 2 March.

The incident occurred at around 11.40 a.m. and the car involved, believed to be a dark blue BMW, did not stop and drove off in the direction of Kings Ash Road.

A male pedestrian in his 30s sustained life-changing injures and continues to receive medical treatment.

Following enquiries, Devon and Cornwall Police officers arrested a 25-year-old man from the Paignton area on suspicion of attempted murder in Rochdale on the morning of Friday 12 March.

He remains in police custody at this time.

A 32-year-old woman from Paignton previously arrested on suspicion of attempted murder has been released on police bail until 29 March while enquiries continue.

Police are appealing for any witnesses of the collision, or anyone with dashcam footage or CCTV footage from the area at the time, to come forward if they have not already done so.