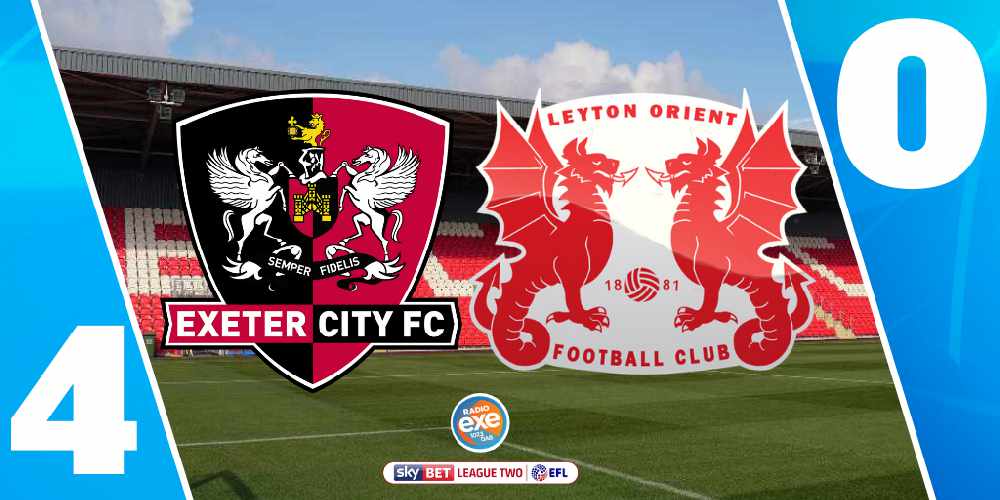 City back to winning ways

Exeter City pick up their first win in three games as they comfortably defeat Leyton Orient 4-0 at St James Park to jump back into the play-off places.

City’s academy graduates produced the goods, with a hat-trick from Matt Jay and one from Joel Randall, as Orient’s torrid league form continues.

Matt Taylor’s keyman upfront Ryan Bowman, who’s back from his three-game suspension, was Exeter’s only change from Tuesday’s goalless draw - and he was at the heart of City’s deserved opener.

The towering centre forward used his chest control superbly to bring the ball out of the air on halfway before playing a long through ball to Joel Randall – the winger ran 40 yards before squeezing the ball through the goalkeeper’s legs from a tight angle.

Just two minutes later, Matt Jay tried his luck from 20 yards out, the ball was directed straight at the goalkeeper - but it was fumbled to gift the Grecians another goal.

Taylor’s side continued to dominate the half and had more chances throughout, Orient however, couldn’t even manage a shot on target.

On the stroke of half-time, Jay bagged his second goal of the contest to make it an uphill climb for the visitors in the second half. City’s academy graduate tapped the ball in from close range after Randal’s shot came off the post. City led 3-0 at the break.

City started the second half where they left off in the first – they were awarded a penalty after give minutes when Randall made another darting run into the box before being hacked down. From the spot kick, Jay kept his composure to send the keeper the wrong way and bag his first hat trick of the season.

Exeter’s loanee goalkeeper Jokul Addresson was called into action for the first time on the hour mark. City substitute Nigel Atangana gave away a central free kick 40 yards out – Orient went for goal, but the attempt was palmed away by the Icelandic keeper.

Orient came agonisingly close to a consolation goal late on with another long-range free kick, but this time it went just over Andresson’s bar. It ended Exeter City 4 Leyton Orient 0.