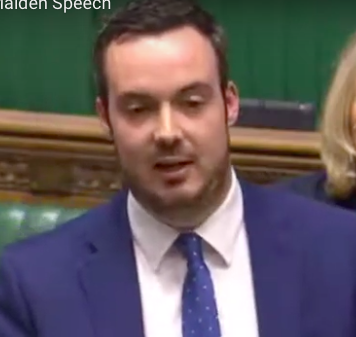 It has been revealed that East Devon MP Simon Jupp stayed at a property owned by former councillor John Humphreys the year before he was charged with sexually assaulting two teenage boys and subsequently sentenced to 21 years in prison.

It is believed Mr Jupp stayed at Mr Humphreys’ vacant flat on Salterton Road in Exmouth in the run-up to the 2019 election.

Mr Jupp, who is from Plymouth, had won the local Conservative’s party selection process after East Devon’s previous conservative MP Sir Hugo Swire decided not to stand for re-election.

Humphreys, 60, who was also previously an Exmouth town councillor and at one point served as mayor of Exmouth, was convicted in August last year of sexually assaulting two boys 10 years apart.

Simon Jupp states unequivocally that he knew nothing of Humphreys’ crimes at the time.

In a cabinet meeting [on Wednesday 4 May], leader of East Devon District Council (EDDC) Cllr Paul Arnott (Independent East Devon Alliance and Democratic Alliance Group, Coly Valley) sought clarification from the East Devon Conservatives about whether Simon Jupp stayed at a flat owned by Humphreys in 2019.

This was before Humphreys was charged and appeared at Exeter Magistrates Court, where he was bailed to appear at crown court in 2021.

Cllr Arnott said: “If I had been the person who, as it turns out, was the tenant of John Humphreys, who had just been elected to parliament, on hearing that he had been convicted and sent to jail for 21 years I think what I would have done is issued a press statement about that.”

In a statement following the council meeting, Mr Jupp said: “First and foremost, my thoughts are with the victims of John Humphreys’ horrendous crimes.

“For less than two months in 2019, I lived at a flat owned by Mr Humphreys but was completely unaware of his abhorrent crimes for which he was jailed in August 2021.

“I deplore his actions. Had I known anything about his crimes, I would not have lived at the property and would have immediately reported my concerns to the police.”

In the EDDC cabinet meeting, Conservative councillor Maddy Chapman (Exmouth Brixington) said: “John Humphreys did own a flat in town which was let out for a number of years to different people.

“He rented a flat which I understand John Humphreys’ partner let to him for a couple of weeks while he was waiting for his house in Sidmouth to go through because he wanted to live in the constituency so I wouldn’t like any assertions to fall on Simon.

“I think he’s a very good MP. He works for East Devon really really well and tries really really hard and supports the local residents. So I was not aware of anything on John Humphreys.

“None of my colleagues were aware and anyone that says that they heard rumours they should have told us.”

At his trial, it was revealed that John Humphreys had been initially questioned on suspicion of sexual offences against children in 2005 but police did not find sufficient evidence for a prosecution.

Following a complaint by a second victim, Cllr Humphreys was arrested in 2016 before being released under investigation.

Neither incident was made public and Mr Humphreys continued to be a councillor until May 2019, eventually being awarded the honorary title of alderman by the council  in December that year. The title was removed by the council in 2021.

Conservative members of EDDC, of which Mr Humphreys was a member, have also denied having any knowledge of his crimes whilst he was in office or when he was subsequently given his honorary title.