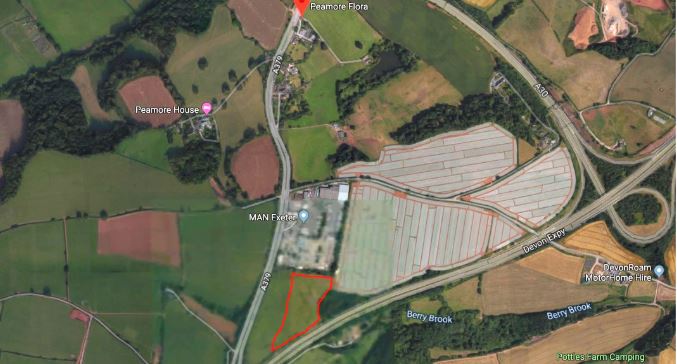 Plans for a new park-and-ride site to serve Exeter have been welcomed by councillors.

Devon County Council’s cabinet on Wednesday unanimously voted to approve the principle of a new park-and-ride being built just off the A379 and A38 at the Peamore Industrial Estate.

The park-and-ride site would occupy land between the A379 and the A38, and access would be via a new roundabout that is set to be created on the A379.

Stakeholder consultation, which will involve local councillors on Devon County, Exeter City and Teignbridge District Council, as well as parish councils, is now set to take place., If there is support for it, Devon County Council will then submit a planning application for a park-and-ride site at Peamore.

Cllr Yvonne Atkinson, who represents the Alphington and Cowick ward, said that she welcomed the idea, and added: “I would be delighted if the Peamore site could be secured as it is absolutely essentially to reduce congestion and improve quality of life through the village of Alphington.”

She asked: “Is it in the bag and will it go ahead, and if so, what is the timescale for permission and building it?”

In response, Cllr Andrea Davis, cabinet member for infrastructure, said that was nothing was definite as she couldn’t predict the response from the consultation or whether planning permission would be granted by the council.

But Dave Black, head of planning, transportation and environment, said that the council have laid down their aspiration to do this. He added: “When we did a consultation on the Exeter Transport Strategy earlier this year, the biggest thing people wanted was more park-and-ride sites.

Mr Black also confirmed that the county council would commit to extending the cycle path set to be built as part of the South West Exeter development down past the proposed park-and-ride site to Kennford.

The cabinet also agreed to award the contracts for the construction of two additional new junctions on the A379 within a budget threshold of £4.5m.

The eastern junction is a new access junction to a development parcel between the Devon Hotel and Matford roundabouts and would enable two parcels of land to be developed.

A second junction, which will have sufficient capacity for both the proposed new free school and an early phase of development, is also planned. The signalised junction would then be upgraded at a later date in combination with other works to the A379.

A planning application for the new 630 place primary school and 750 place secondary school for the site has been submitted and is awaiting determination by the county council.

Linked to the delivery of the proposed all-through school is the delivery of a pedestrian and cycle bridge across the A379, and the county council is currently working with developers to confirm final levels for the bridge to allow detailed design to be progressed, but the design and cost remain appropriate compared to the funding received from the Housing Infrastructure Fund.

The works are to be funded as part of a successful £55.1m bid the council had towards infrastructure to support development at South West Exeter, where eventually 2,500 new homes will be built.

Land for the proposed park-and-ride would be secured from in lieu of a monetary repayment from the developers, and the meeting heard negotiations with the owners of the parcel of land hoped to be used as a park-and-ride are currently ongoing.

The site is next to land that Teignbridge District Council controversially gave permission for a major commercial extension last year, with the Exeter Estates Ltd scheme having the potential for 1,600 new jobs to be created.

The land for which planning permission was granted is currently up for sale with a price tag of £18.5m https://propertylink.estatesgazette.com/property-details/6499477-peamore-truck-centre-and-west-exe-park-alphington-exeter-ex2-9sl

Other infrastructure set to be developed at a later date around South West Exeter as part of the HIF bid includes the realignment of Chudleigh Road, Alphington Village enhancements, a new country park, and further junctions on the A379.