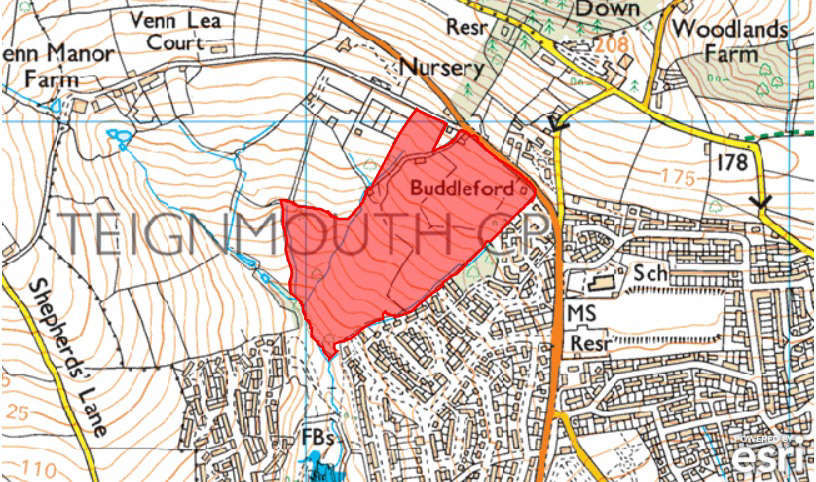 Detailed plans for 255 new homes on the edge of Teignmouth have been deferred until next year because of councillors’ concerns.

Despite outline permission previously being granted in 2014 for the site at Higher Exeter Road, over 400 objections were received to the final ‘reserved matters’ application for the appearance, landscaping, layout and scale of the properties.

At a meeting of Teignbridge District Council planning committee, members agreed to defer the application until the end of January to allow more time to consider the details and conduct a further site visit.

Developers plan to construvct 242 homes, including 10 flats – while 13 custom-build plots will also be provided at the site, which is set aside for housing in the neighbourhood plan.

A quarter of the homes (64) will be designated as ‘affordable’ (typically 80 per cent of market rate) and include a mix of affordable rent and shared ownership. They would be offered first to local residents, those in housing need, or those with strong connections to Teignmouth.

A report to the committee recommending approval revealed 445 letters of objection have been received, compared to just 10 in support. More than 100 separate concerns were listed, including about the impact on the countryside and on the character of Teignmouth and the Teign Estuary.

Objectors also took aim at the density of the scheme, how properties “in this elevated site would be overbearing and dominant,” along with worries about ecology and fears about increased traffic and congestion.

Some of the 10 letters in favour mentioned how the development would help tackle the “lack of affordable housing in [the town]” and would “create local jobs and increase tourism.”

Speaking at the meeting, supporter Sam Woods, director of one of the firms linked to the scheme, said the homes would be built in a timely manner and that they would all feature air source heat pumps and electric vehicle charging points.

The proposed development includes a total of about 15 acres of open space and areas for wildlife, a community orchard, grassland and hedge and tree planting. A formal play area is planned, along with two other ‘informal’ spaces for play and a public art feature.

But public objector Jimmy Robinson slammed the scheme – saying it will mean “another 13 hectares of green fields, natural environment and habitat in Teignbridge is going to concreted over.”

As well as questioning whether there would be school places for the development’s children, and how – due to the hilly location – they would get there without being driven, he also warned councillors about potential safety issues surrounding the nearby roads.

Mr Robinson added: “The reserved matters, as you saw, provides space for public art. While you’re considering if there should be an Antony Gormley or a Damien Hirst and who will pay for it, do not care about the fact that primary healthcare in Teignmouth is in a critical condition and it struggles to support the existing population.”

He said: “We’re shoe-horning a massive amount of housing into a very tight space on a very steep hill with a lot of drainage problems and a lot of traffic issues…. then of course we’ve got the pollution that comes with that.”

Councillor Jackie Hook (Lib Dem, Bushell) criticised why some information, including on ecology, had yet to be submitted and said there was potential for arranging the houses so they could have solar panels. She said: “I know we can’t insist on that ….but this is going to make properties more attractive very, very soon.”

The committee unanimously voted to defer, meaning the application will return to a meeting in the new year.