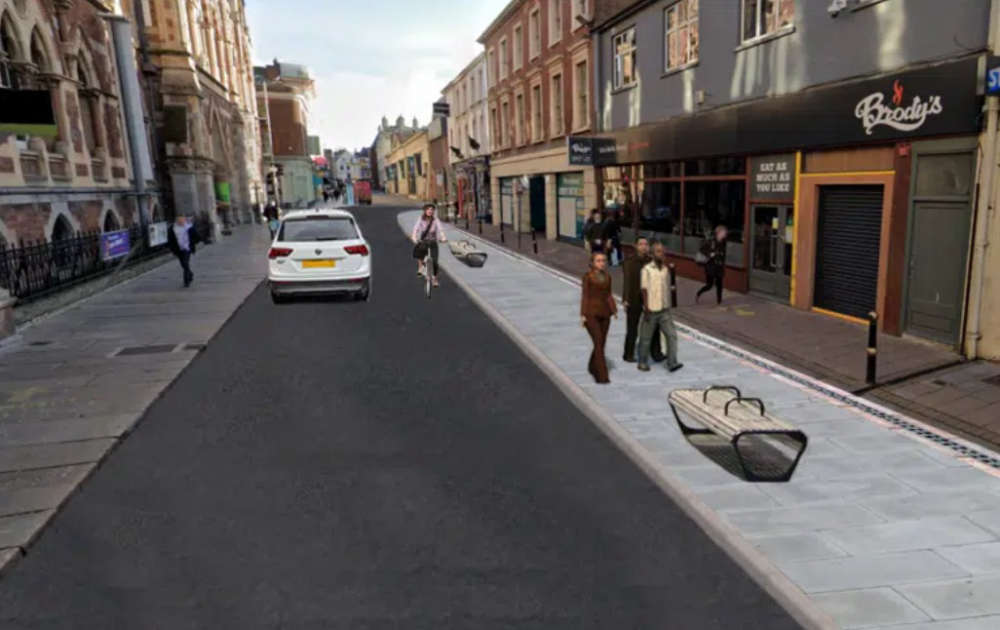 The public is split on whether to make road changes on Exeter’s Queen Street and Iron Bridge permanent, initial findings from a consultation have found.

To help social distancing, Queen Street became one-way eastbound between Paul Street and Northernhay Street at the start of the year with wider footways and traffic limited to a single lane  – although two-way access for buses, taxis and cycles has been maintained.

When the measures were introduced, Devon County Council described them as ‘temporary’ but a four-week consultation on their future has just finished, following a recommendation from the Exeter highways and traffic orders committee (HATOC).

Presenting the findings to the committee, Will Pratt, the council’s lead for transport, strategy and infrastructure delivery, said the 600 public responses were broadly spilt 50-50, though improving the area for pedestrians was broadly welcomed.

However, he added: “There were some concerns raised about cyclists currently using the wider footway area and what we’ve got there perhaps isn’t necessarily to appropriate standards for cyclists.”

Members were also told there had been complaints about vehicles having to drive further to navigate round the one-way system, while views were mixed on whether the Iron Bridge should be reopened fully or pedestrianised.

Most organisations consulted were in favour, including Exeter College and Stagecoach, but St David’s Primary School was against the changes. Councillor Carol Whitton (Labour, St David’s) said poor signage was one of their concerns, as the new layout has led many drivers going up nearby Dinham Road to turn around – creating an “additional hazard for children and parents.”

She continued: “The fact the consultation appears to be coming back on an even 50-50 response in some ways is not entirely helpful to us as members in deciding how to proceed, but I do note – and I think this is significant – that the traders and BID [Exeter’s city centre marketing group] are very supportive.

“Also, bearing in mind that we now have the citizens’ assembly also coming out very strongly in support of measures across the city which increase road space for active travel and decrease road space for car use. I think that is something that we’ve got to keep in the back of our minds.”

Supporting the scheme, Councillor Rob Hannaford (Labour, Exwick & St Thomas) said: “I think for me, the tipping point on this is the safety of the college students. There are literally thousands of college students going backwards and forwards along that area every day when they’re open.

“Often very narrow pavements, often forced to walk in the road because it’s not wide enough and there’s the sheer volume, so I think we very much need to factor that into our decisions to keep them safe and not have any accidents.”

Councillor Percy Prowse (Conservative, Duryard & Pennsylvania) requested more equality considerations after receiving a letter from a resident, who claimed there is too much street furniture along the current footway and that people have to “wait an eternity” to cross the road outside Northernhay Gardens due to the current temporary light setup.

Supporting the current layout, Exeter College principal and chief executive John Laramy said last month: “I think the pilot that’s been happening has worked brilliantly. It gives pedestrians and cyclists more space, so we’d fully endorse the idea of actually making Exeter a little bit more car-free and a little bit more bike and people friendly, so we’d be fully behind that as an idea.”

No final decisions were made at the meeting, but members did agree that Cllr Whitton, officers and the chair of HATOC look in more detail at the consultation responses before deciding what to do.