Only half cash found for Cullompton relief road 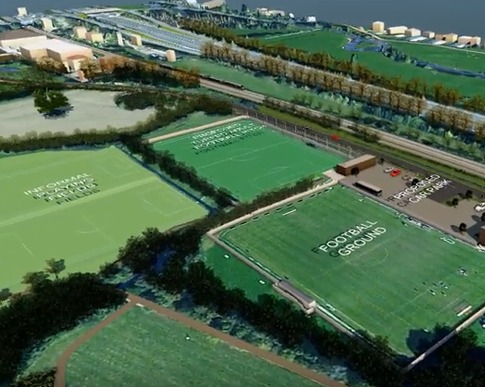 The planned area for the Cullompton relief road

Fresh funding bid to be launched

A fresh bid for government funding towards a new relief road in Cullompton is set to be approved by Mid Devon councillors next week.

The planned road to the east of the town will improve capacity at junction 28 of the M5, help reduce traffic through the town centre and unlock the development of 2,000 homes nearby, including an initial 500 properties to form part of the Culm Garden village.

However, the district council remains short of around half of the road’s estimated £25 million cost after an initial bid to the government’s ‘levelling-up’ fund was rejected in December.

Mid Devon District Council’s ruling cabinet will be asked to sign off a new bid for the fund’s second round when it meets on Tuesday [28 June].

Originally set to cost £15 million, last year councillors were told the projected cost had ballooned to an estimated £25 million – blamed on increased costs from construction, replacing sporting facilities and the potential amount needed to buy land.

Planning permission has already been granted for both the road and a new home for Cullompton Cricket Club, which will need to relocate if the road is built.

“This is, after many years of looking at it, the best way that both Mid Devon and Devon County could come up with delivering something that would take Cullompton forward – particularly with the levels of growth that are likely in a town like Cullompton and with the garden village in mind,” he said.

Devon County Council supports the project and has pledged £1.5 million, while it is also backed by all the main party candidates for this week’s Tiverton and Honiton by-election.

Helen Hurford, Conservative hopeful and former headteacher, said: “I know what it’s like to be stuck in traffic in Cullompton.

“One of my schools was Willowbank in the centre, and I know what that feels like when you’re trying to get home and you’re stuck trying to get out – it adds an extra 15 minutes each way, so, I will definitely be supporting.”

Liberal Democrat rival Richard Foord said he was “very much supportive,” but questioned why the previous bid has been rejected, accusing the Tories of spending levelling-up money in the north of the country and neglecting Devon.

The Conservatives reject such claims about underfunding, saying the government is “delivering for people in Tiverton and Honiton and across the whole south west,” including funding transport improvements.

On the road, Mr Foord added: “We are going to see ever greater atmospheric pollution along Cullompton High Street if we continue to squeeze traffic through a very narrow area, which is heavily pedestrianised and where lots of people are having to breathe in the fumes of stagnant cars stuck in congestion.

“It’s for people’s health and wellbeing that we absolutely need to release Cullompton High Street of traffic and get it back to the picturesque market town that it used to be.”

Labour’s Liz Pole has also indicated her support but said the fact it’s needed is one of the reasons why the planning system in England needs overhaul.

“Those communities have got traffic coming through them that isn’t their traffic, they just happen to be on a road that has a lot of traffic grinding through it that’s going somewhere else. And yet to solve that problem, they’ve got to build thousands of houses in their town without the infrastructure to support those homes…”

The Green candidate Gill Westcott, while generally opposed to building new roads, said there were “particular features” in the town that would justify a relief road and not have traffic going “so intensely through the middle.”

Mid Devon’s cabinet will vote on the new bid on Tuesday [28 June] and is likely to hear back from the government by the autumn.

Eight candidates are standing for the Tiverton and Honiton seat: