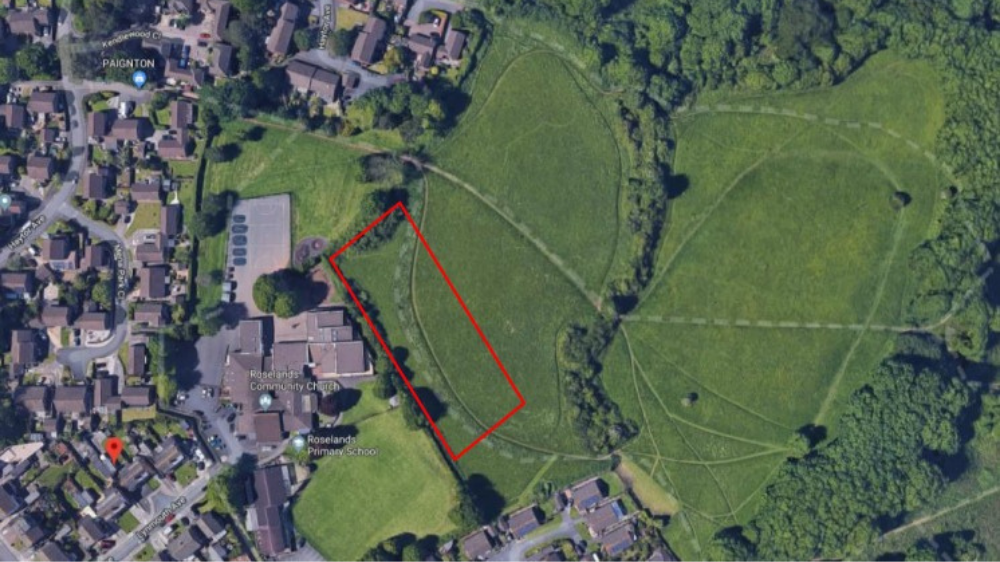 Neighbours aren't happy about it

Neighbours are objecting to a plan by a school to take over more than an acre of public open space in Paignton.

Roselands Primary School wants to fence off 4,851 square metres of grassland in Clennon Valley and has submitted a planning application for change of use for the land.

The school at the end of Lynmouth Avenue was built in 1979 and has been extended in recent years.

It says it needed the extra land even before agreeing to increase the number of pupils ahead of the opening of a new school in the area.

Torbay Council has already agreed to lease the field to the school for 25 years at zero rent.

Three people had submitted objections to the scheme on Torbay Council’s online planning website by Monday.

Lisa Pope wrote: “These fields are a haven for wildlife and rare flowers.”

She said if the council had insisted on a new school being built alongside new homes in the area, there would be no need for Roselands to expand.

Amy Clift said: “Although I understand why the school would want the space, it’s equally important to have free natural space for locals who use that area.”

Andrew Bamforth commented: “As a resident here in Roseland for the last 23 years and having chosen this area for its green spaces we are distressed to see that after losing one field to the school that you wish to make more of our green space inaccessible to the public.”

He raised concerns about the school adding more classrooms which would increase congestion on local roads and said local residents who could only use the top field would be deprived of an accessible exercise area.

A statement by TDA on behalf of the school, submitted with the planning application, said: “The proposal confirms that the land will strictly be accessed from within the school grounds by way of a new gate, the surface will remain grassed and the area will be enclosed by a new palisade fence for safeguarding.

“It is not proposed to remove any of the hedgerows on site other than to trim back for the safety of the children, to preserve any protected species and at fence intersections.”

The TDA report said the proposal for land within the Grange Farm Other Site of Wildlife Interest would not cause harm to the area and did not breach local planning policies for Clennon Valley.

An ecology report proposes measures to safeguard wildlife, including ‘mammal gates’ in the fence, and to install bird boxes.

The transfer of the land to the school on a 25-year lease at no cost was approved by the council at a meeting in October 2018, at the same time as it agreed to fund work to create an extra classroom which was finished in 2019.

The extra space was needed for the 315-pupil school to take 15 additional children a year in 2018 and 2019 ahead of a new primary school being built in the area.

The new St Michael’s Church of England Academy is due to open in September 2021 for nursery and reception children on the site of the former Tower House School in Fisher Street.

In a consultation letter sent out in September 2018, the head of Roselands Chris O’Connor said the school did not have enough space even before taking the extra children. The increased land would allow it to move the playing field and football pitch to make room for a new hall.

Consultation carried out at the time showed most parents who responded were in favour of the plan, but some residents objected. Mr O’Connor acknowledged the concerns raised about traffic and congestion and said a transport assessment would be carried out.

In a study submitted with the planning application, a highways consultant concluded that the road network would provide safe and suitable access for the minor increase in pupil and staff numbers.

The current public consultation relating to the change of use application continues until Wednesday, May 19.

Questions still remain over the site of a second new free school for Paignton, to cope with the growing population.

A new primary school is part of the plans for the Inglewood development between White Rock and Galmpton, which were approved by a planning inspector in April.

But because of uncertainty over the scheme, which was on hold pending the outcome of the appeal, Torbay Council identified an alternative site at Wilkins Driver in White Rock, near Aldi.

A second free school has been given conditional approval by the Department for Education, dependent on future housing growth in the area over the next three to five years. But the council was warned in 2020 that the department may withdraw approval if a site was not found in 12 months and secured within two years.