Rainbow crossing is a no go 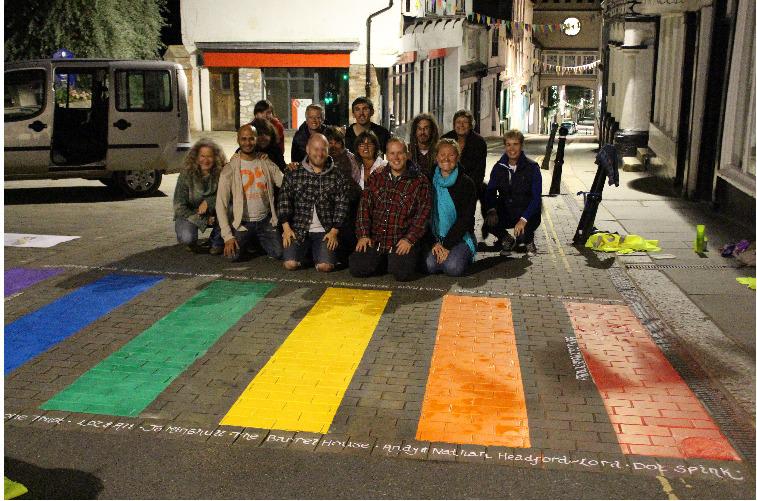 The Totnes Rainbow Crossing Action Group has been working on establishing a permanent rainbow crossing in Totnes following the success of the temporary crossing set up for the town’s pride event in 2014.

The crossing, which was located outside St Mary’s Church in the High Street, was removed after the Pride event.

The South Hams Highways and Traffic Orders Committee in 2017 had welcomed the suggestion for colour enhancement to be added one or two crossings in Totnes and for a further report on specific plans and location to be brought forward to a future meeting.

But officers and councillors agree that a rainbow crossing on the highway itself was not something they could support – but were keen to see a crossing located around the town hall.

Highways manager John Fewings said: “We were asked to look at this and looked at a number of sites around the town, but we had some concerns about a crossing on the highway as the markings could be seen as ambiguous and people might not be sure what it was. For us, the best solution is not to not put it on the highway.”

Cllr Roger Croad, chairman of the South Hams HATOC, added: “A crossing on a road would cause confusion and the thought of interfering with the highway, I am completely against it.”

Cllr Julian Brazil added that the committee should send a strong message that allowing a rainbow crossing on the road should not be allowed, but that a crossing in the Civic Square should be favoured.

Mr Fewings said that they had looked at the area at Market Square around the Civic Hall, but the town council had said that it wouldn’t fit into the refurbishment plans for the area they had for ‘aesthetic reasons’.

Cllr Jacqi Hodgson, who represents the Totnes and Dartington ward, said: “The refurbishment will be in heritage colours and the thought was that a rainbow in the middle of that might jar.”

Cllr Peter Smerdon said: “Totnes is renowned for compromise so I thought an aesthetic compromise could be made to get it in and around the Civic Hall as it is a good place to put it.”

Although other cities, including London, Brighton and Sydney, have had temporary multi-coloured crossings, it had been hoped that Totnes would have been the first in Europe to make it permanent. Vancouver in Canada already has a permanent rainbow crossing.

The point of the rainbow colours of the crossing would be to celebrate the full spectrum of diversity in Totnes and send out a message to LGBTQIA+ people in Devon and beyond, that they are not alone.

The crossing will also enhance the visibility of an existing crossing point in Totnes – thus contributing to pedestrian safety.