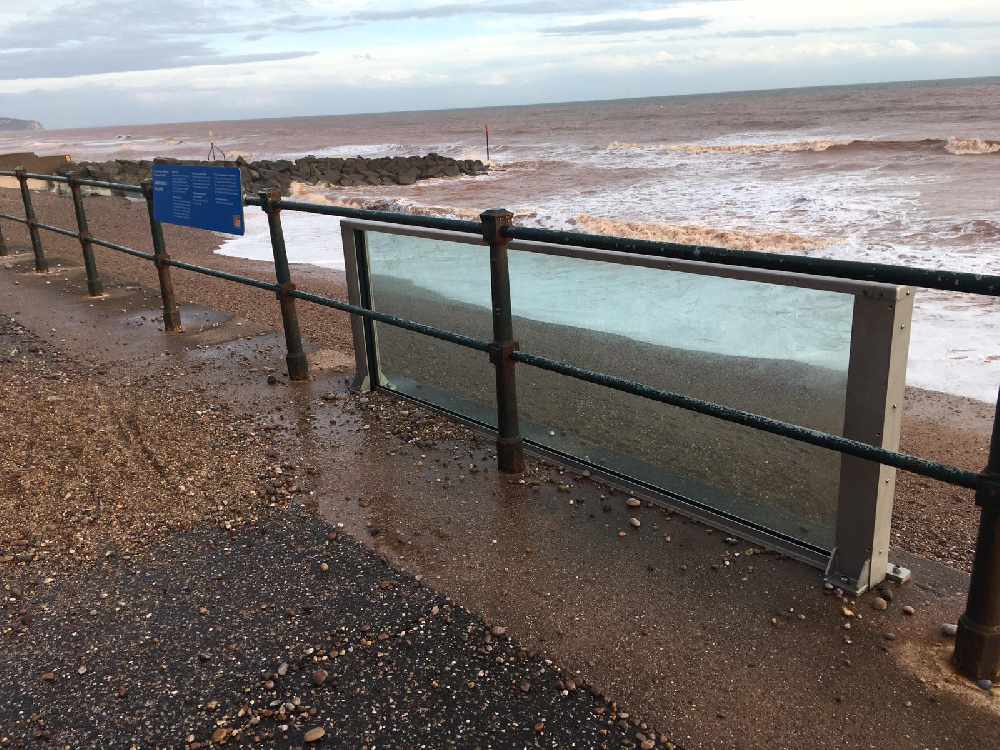 The temporary glass had been damaged during Storm Ciara.

A spokesman for East Devon District Council said: “Our glass splash defence test panel at Sidmouth has now survived two major storms: Ciara and Dennis. We’ll continue to monitor its effectiveness but so far, bar two very small chips, it has been undamaged.”

Cllr Stuart Hughes, who represents the Sidmouth Sidford ward, and who is the Devon County Council cabinet member for highways, added: “Dennis was one of the most powerful storms recorded & the glass panel has taken a vigorous test … remember IF used it won’t be near the railings & seawall edge.”

The Sidmouth and East Beach Management Plan’s preferred option involves raising the height of the splash wall by one metre, as well as involving beach replenishment, periodic beach recycling, a new rock groyne on East Beach, and repairs to the river Sid training wall.

East Devon District Council have been exploring the possible use of glass sections of sea defence and the glass panel has been installed at the top of the existing sea wall, mid-way between the York Street and Fore Street road junctions in Sidmouth.

Cllr Geoff Jung, Portfolio Holder for the Environment for East Devon District Council, added: “The location was chosen to receive the maximum impact from the sea and pebbles. However, the splash barrier, if the trial proves it to be effective, is intended to be located between the highway and promenade, to a maximum of one metre high from the promenade floor level.

“Fitting Glass sections, plus other possible initiatives will all be considered, prior to a public event when all the options will be explained and consulted upon.

“This seafront location trial will allow us to analyse if glass sections can be used in a location such as Sidmouth.”

Costs for construction of the scheme are estimated at £8.9million, with around £1 million still needed to be found.

The South West Regional Flood and Coastal Committee (SWRFCC) have agreed to grant the BMP £500,000 to help bridge the effective funding gap, which had stood at £1.5million.

The planning and delivery of the Sidmouth Beach Management Scheme is included as a key objective as part of service plans for the council in 2020/21, with the funding gap required to be found by August 2020 as a shortstop deadline, and December 2020 as a longstop deadline. If by then the funding has not been found, the council will have to review the project.