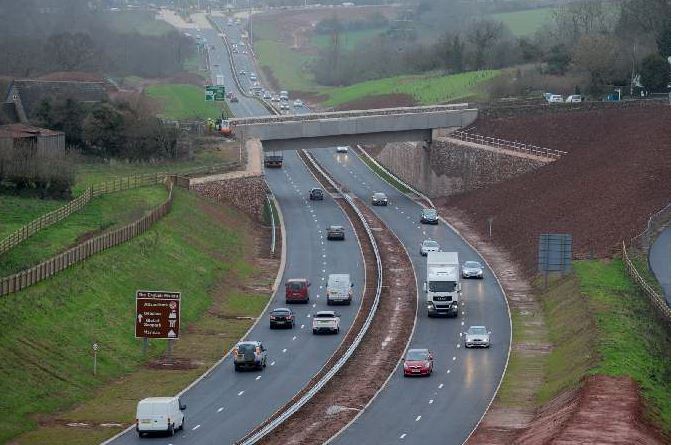 Compares to Exmouth's 48 in one night

More than 3,000 motorists were caught speeding on the South Devon Highway in the last 12 months.

Figures revealed at a Devon County Council full council meeting, following questions from Cllr Gordon Hook, showed that 3,089 notices of intended prosecution had been issued for speeding offences,  including the period where the public were advised to stay home during lockdown.

Cllr Hook had also asked for details as to how many of these have been paid, what sum of money has been generated and what has happened to that cash? But Cllr Stuart Hughes, cabinet member for highways, said that any fines are collected by the courts and that while the level of detailed information for the safety camera operations within Devon is not readily available from either Devon County Council or the Peninsula Road Safety Partnership, he would try and find out

The average speed cameras on the 50mph road between Newton Abbot and Torquay were turned on in February 2019 and a Freedom of Information Request last summer showed that more than 2,500 motorists were caught speeding in the first 100 days of speed cameras being operation.

The new £110m expressway between Torquay and Newton Abbot opened in December 2015, easing congestion and ending queues through Kingskerswell. But residents whose homes have said to have reduced in value since the construction of the South Devon Highway are entitled to receive compensation. Cllr John Hart, leader of the council, said that "negotiations were progressing well" in resolving the claims.

Cllr Hook said: “Some residents have waited between five and seven years. Their lives have been ruined or disrupted, so have Devon County Council acted with sufficient alacrity, when will residents see the claims settled, and are there further plans to reduce noise levels further?”

In response, Cllr Hart said: “Negotiations are progressing well. Additionally, with the traffic levels returning to near normal in September we are now able to start undertaking the required additional noise surveys. We have also engaged a sub-contractor to assist with this work to make the most of the potentially available time and hope to complete before the half term at the end of October.

“We are working looking as fast we can, but we had to finish the road first. There were mistakes made in the calculations initially, but we have people working on it and want it resolved in the future. We are doing our best to get things done, and it has taken longer, but it is not totally in our control.” Cllr Hart added that the latest noise level readings were within the tolerance of what was expected when the road was initially designed

More than 800 residents had initially submitted claims, although only 270 of them were actually eligible for the Part 1 claims, councillors had previously been told.

On the night of the council meeting, Devon and Cornwall Police issued 48 fines in Marine Way, Exmouth.