Third of a billion pound investment planned for Exeter 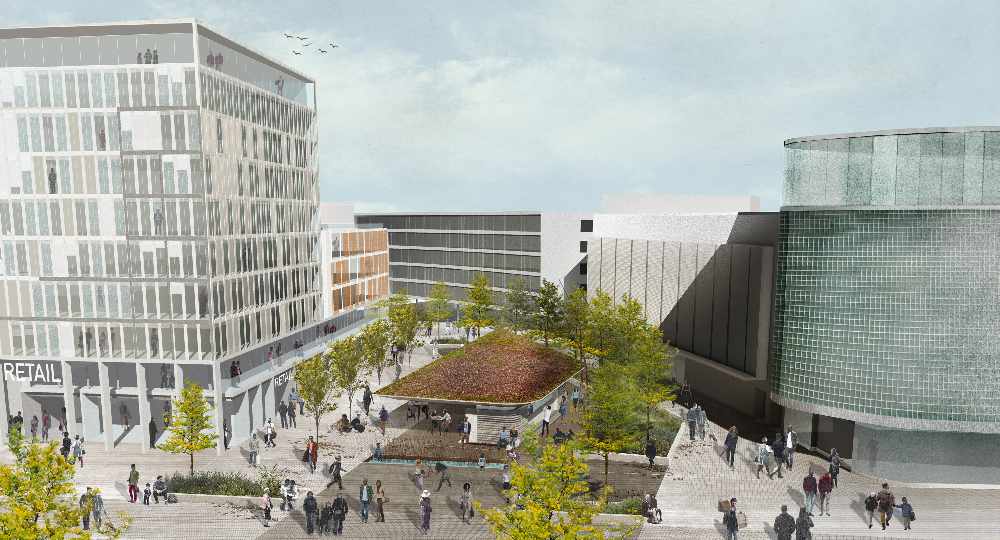 The new pedestrianised Paris Street? The current Next building and Princesshay is on the right.

Exeter could get a major new performance venue, 10-storey hotel opposite John Lewis, and new housing and offices as part of a major regeneration worth almost a third of a billion pounds.

The new scheme - a replacement for an earlier scheme based mainly around restaurants and shops, which was pulled when the developers, Crown Estates, withdrew earlier this year, was put to councillors on Monday night.

Exeter's chief executive and growth director Karime Hassan - a leading figure behind the Princesshay development in 2005 - presented his plans to a committee, saying he intends to ask them to approve £390,000 to take them to the next stage. Of that, £90,000 will investigate the idea of the theatre and performance venue. £300,000 is to work up proposals for the wider site. The ideas will be discussed by the council group responsible for the leisure complex and bus station replacement next week.

The cost of the plans has shot up since they were first mooted in 2010. Before these latest ideas, the budget had risen to £39 million for a swimming pool and leisure complex that will be known as St. Sidwell's Point. That complex, together with a new bus station in the city centre, are both being funded by the city council, with building due to start in January - provided councillors agree to fund an additional £12 million through borrowing.

If approved, it will deliver a huge new development, spanning Paris Street and Sidwell Street, which will take years to build, and will cost £52 million, will see the eastern area of the city centre transformed. Forty million pounds is already secured and approved by the council. The additional £12 million will have to be borrowed, but councils do get interest rates lower than those generally available to commercial bodies or the public. Mr Hassan insists council tax won't rise to pay for the development, and that much of the money is already in the kitty. He says: "The council will invest £52 million to unlock around £300 million of new facilities for the city centre," he says. "Unlike other councils, we're not going to sit back and manage decline. We will invest for the future and attract people into the city."

Nearly a million square feet of space will be redeveloped; nearly twice the size of Princesshay. But unlike Princesshay, which predominantly comprises restaurants and shops, the new development will have an array of uses, of which only a small proportion will be for retail use. The centrepiece is St Sidwell's Point, a high-quality leisure complex. But housing is also key.

The city council has come under much criticism for approving too much student housing in recent years. No student housing is listed in the current plans. But more than 500 homes are includes, split roughly equally between homes for rent and homes that will be sold on the open market. Councillors will also get a new home, as the civic centre will be demolished to make way for housing.

A new multi-purpose performance space, with a 1,200 seater auditorium that can be transformed into a standing venue accommodating double that number will intrigue those who have campaigned for a new city-centre theatre. Until recently, Fore Street had been mooted as a location for a new theatre, to replace the Corn Exchange. This new scheme will delay any plans for that redevelopment.

A new office quarter could see modern office facilities rising up to eight storeys - nearly, but not quite the height of 10-storey John Lewis. Some office provision has been lost in the city centre recently, as rabbit-warren accommodation in the Southernhay area has been changed into private homes. And two new hotels will be build; one four-star, one a budget brand.