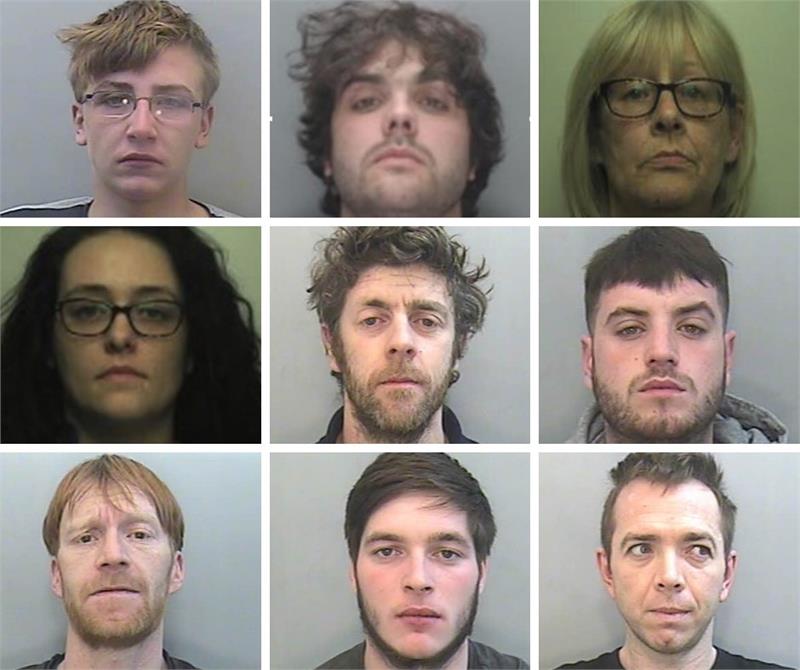 They sold £1.6 million of cocaine and heroin

An organised crime gang which flooded Torbay with an estimated £1.6 million of cocaine and heroin has been jailed for a combined total of 146 years.

Ten dealers and couriers in the group - which brought the drugs into Devon from Liverpool – were sentenced at Exeter Crown Court. The gang's leader and five other people had already been handed significant prison terms at separate hearings in March.

Their criminal crew was responsible for the lion’s share of the Class A drugs market in Torquay and surrounding areas.

It used dedicated and unregistered ‘graft phones’ to deal drugs between November 2017 and March 2019. Officers arrested the gang at the end of that period and seized high-purity crack cocaine and heroin with a street value of £38,840. Investigators believe that – taking the number of courier runs and calls made with the ‘graft’ phones into consideration – the volume of drugs supplied was worth more than £1.6 million.

Judge Peter Johnson sentenced the remaining 10 members of the gang at Exeter Crown Court this week. He described the gang's actions as a "substantial and well-organised conspiracy’" and handed out prison terms totalling 48 years and seven months.

Eight of the defendants pleaded guilty to conspiracy to supply heroin and cocaine. They included key player Liam Southern, aged 21, from Netherton, Merseyside, who had moved to Devon. He was jailed for seven years and nine months. Liverpool-based supplier Jack Ross, 28, was sentenced to eight-and-a-half years in prison.

Paul Riley, aged 39, also a courier from Liverpool, was found guilty of conspiracy to supply heroin and cocaine following a trial. He was jailed for three-and-a-half years. Peter Thompson, 43, who occupied a safe house in Torquay used by the gang, admitted conspiracy to supply cocaine. He was jailed for four years and 10 months.  Danny Ambrose, 32, of Buckfastleigh, pleaded guilty to being concerned in the supply of a Class A drug. He was handed a two-year prison sentence, suspended for two years.

Detectives from Devon and Cornwall Police’s Serious and Organised Crime Branch identified eight courier runs between Liverpool and Devon between November 2017 and March 2019. Police intercepted several of the trips and seized cocaine, heroin and, on one occasion, £30,000 in cash. A number of couriers were used to transport the drugs from Liverpool to Torquay and were swiftly replaced once stopped and arrested.

Separate proceedings saw other members of the gang jailed for a combined 98 years and three months at Exeter Crown Court. They had faced a seven-week trial over their roles in an ambush attack in Paignton in April 2018 in which an alleged rival was stabbed in the head.

Daniel Whitehead, 30, of Torquay, was convicted of wounding with intent and robbery. He admitted offering to supply and being concerned in an offer to supply Class A drugs and was jailed for a total of 10 years. James Barbutt, of Torquay, was found guilty of robbery and admitted conspiracy to supply cocaine and heroin. He was sentenced to a total of five-and-a-half years in prison on 16 March.

Gang members from Liverpool were used to maximise profits and were relocated to Devon to help sell drugs. The group used a safe house in Dorchester Road, Torquay, to store, split and bag-up the frugs. Surveillance images caught members of the crime group visiting the property for short periods of time. Communication between the Torquay group and the Liverpool supply end was constant – with boss Garrett even continuing to make contact while he was on holiday.

Detective Inspector Ben Davies said: “The sentences handed out send a clear message to those who feel that they can transport drugs into our communities. This gang of sophisticated and driven criminals set up a lucrative drugs network making in excess of £1million by selling heroin and cocaine in the South Devon areas of Torquay and Paignton. Through the dedication of the officers involved, this complex investigation uncovered the depth and breadth of the gang’s involvement in the drugs market in these towns.

“The gang made substantial amounts of money during their drugs activity and lived lavish lifestyles - splashing out on holidays, cars, clothes and parties. I commend the professionalism and dedication of the investigating teams in Devon and Cornwall for the lengths they have gone to, ensuring this organised crime group was identified, arrested and convicted. Devon and Cornwall Police will continue to pursue these groups in order to protect the communities they target.

“I would urge any residents to have the confidence to call the police or Crimestoppers and report drug-dealing activity, so we can be made aware and look to stop it as soon as possible. The same Devon and Cornwall officers, working in partnership with the Complex Case Unit within the South West Crown Prosecution Service, have successfully dismantled and incarcerated two separate large gangs operating in both Dawlish and Torquay over the last 18 months.”