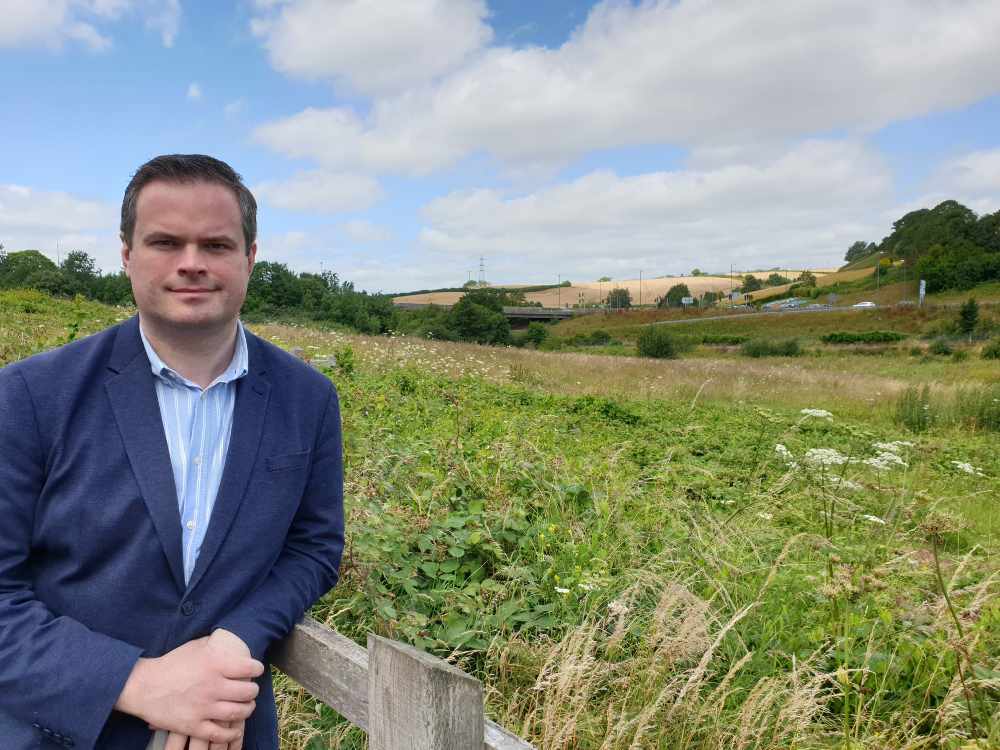 Near the forthcoming Edingswell station

The government is stumping up £2 million to speed up development of a landmark jobs site. The Torquay Gateway, at the junction of the South Devon Highway, is one of 12 ‘shovel-ready’ projects in the region awarded cash from the Getting Building Fund to support economic recovery after lockdown.

Two thousand square metres of new offices and industrial buildings will be built near a proposed new railway station, Edginswell, on the line between Torquay and Newton Abbot. Another 400 homes are also planned for the area, close to Torbay Hospital which is in line for a £400 million rebuild.

Torbay’s Conservative MP Kevin Foster said: “It is great to hear more support is on its way from the government to help our Bay build back from the impacts of coronavirus and move forward with job creating developments. There has been a great team effort in our Bay to tackle the virus, now we need the same focus to take our economy forward, not just to recover to where we were, but become a place where the next generation sees they can achieve their ambitions working here in the Bay.”

A statement from Torbay Council said: “This much welcomed funding comes at a crucial time as we look to accelerate our covid-19 economic recovery plan and create much needed jobs.”

Deputy leader of the council Darren Cowell said: “Torbay is one of the places forecast to be hardest hit by the covid-19 economic fallout, therefore we welcome this investment of £1.96 million from the government’s Getting Building Fund. The Torquay Gateway project will have a wide range of local benefits including creating travel, employment and housing opportunities in Torbay’s largest and most strategically urban extension.”

Two other projects in Torbay have been invited to bid for a share of the £900 million Getting Building Fund.

They are new testing equipment for the EPIC Centre and South Devon College Hi-Tech and Digital Centre in Paignton, and more space to support business growth and flexible working at the Torbay Business Centre on Lymington Road in Torquay.

A study has predicted Torbay is one of the places likely to be hardest hit by a post-covid recession because of its elderly population, relative deprivation and reliance on tourism.

Estimates of the number of jobs expected to be lost due to the pandemic have ranged between 2,600 and 18,000. Torbay has seen 16,500 people on the furlough scheme; a third of the workforce and the highest rate in the region.

As part of its economic recovery plans, Torbay Council has submitted bids for more than £40 million of government investment. It is asking for up to £25 million for Torquay under the Town Deal programme and is bidding for up to £19million from the Future High Streets Fund for Paignton.