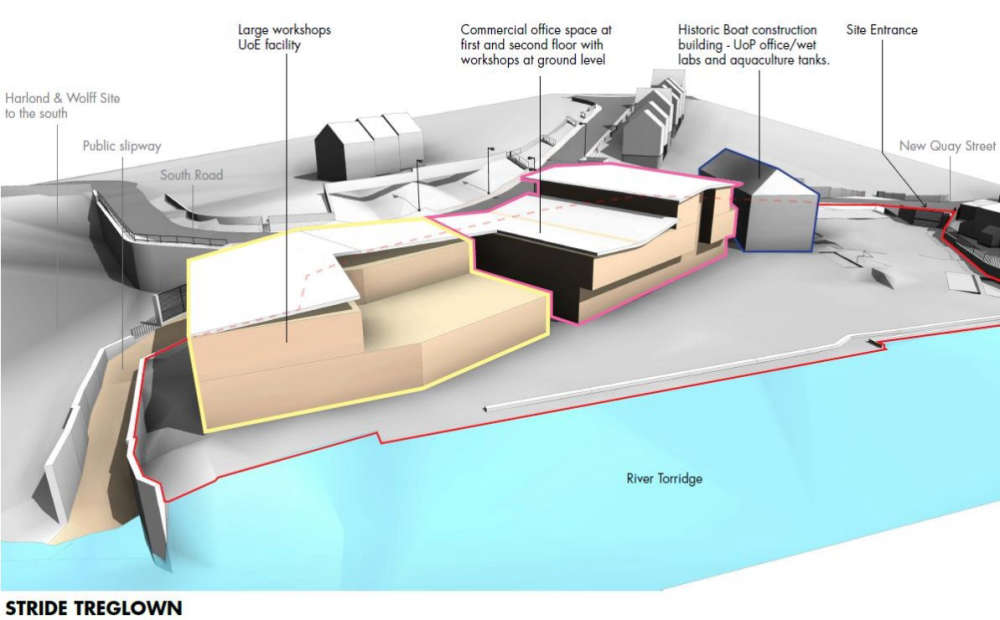 It asks government for most of cash

Plans for a ‘pioneering’ maritime innovation centre in Appledore are being sent to the government in the hope it will receive ‘levelling up’ funding.

Torridge councillors this week rubber-stamped the bid for around £15 million to create the Appledore Clean Maritime Innovation Centre, which the council says will place the area “at the core of maritime developments in the net zero age.”

It is hoped the project, to include the first university research centre in northern Devon, will establish the area as a world leading research and development space in the sector.

The centre will feature research and industry partners from Plymouth and Exeter universities, as well offering workshops, offices, a wet lab and aquaculture tanks to local and national businesses.

The application to the levelling-up fund will be the largest ever submitted by the district council, which will provide match funding to meet the total predicted cost of £17.3 million.

It says the centre will “act as a catalyst for local economic growth” by providing a base for floating offshore wind activity in northern Devon – otherwise known as FLOW.

Electricity generated by the proposed Celtic Sea FLOW developments will be equivalent to powering approximately three million homes and providing around 3,000 jobs. It could also create £682 million in supply chain demand across the south west and Wales.

A report presented to an extraordinary meeting of the district council on Monday [4 July] said: “All of these higher-skilled and higher-paid roles will stimulate a greater spending power in the community and follow-on private investment, including in local town centres and employment infrastructure.

“Crucially, [the centre] will provide new inspiration and a visible indication of the potential to truly succeed in Torridge and across northern Devon, boosting education and addressing long-term, engrained deprivation and truly embodying the levelling up agenda.”

Councillors were previously told how the project seeks to improve the local economy, stating that GDP per head in Torridge is only £17,493 compared to £26,765 in neighbouring North Devon.

Chances that the bid will succeed are boosted because Torridge’s priority for levelling-up is at the highest level (level one).

Local MP Sir Geoffrey Cox (Conservative) has provided a letter of support, andthe council claims a series of ‘community engagements’ are 99.9 per cent positive about the proposal.

Leader of the council Ken James (Independent, Milton & Tamarside) said in the report: “The benefits to the local economy and the local community are both clear and significant.

“This is the single most significant opportunity which has ever been presented to us as a council, and it is an opportunity which we must capitalise upon in order to truly address deprivation constraints and ensure that Torridge absolutely is a great place to live, work and visit for all.”

“Unless we are proactive with this project we will not create the enormous potential benefits or address the deeply-engrained deprivation issues which have held this area back for too long.”

Members approved the levelling-up bid and also agreed for the council to undertake further work on design so that a full planning application can be submitted.

The government is expected to decide which bids have been successful by the autumn. If given the green light, Torridge expects the centre to open in 2025.