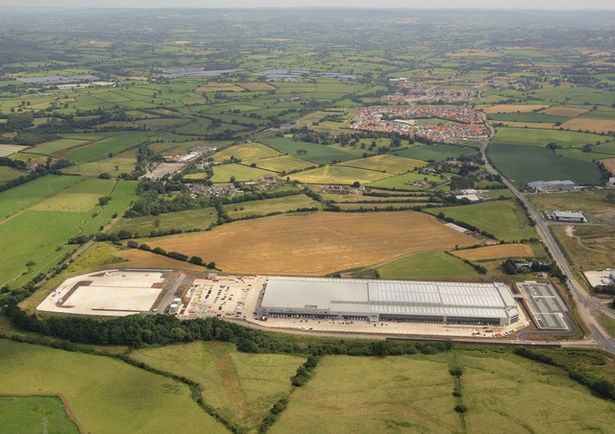 Exeter Gateway area pictured before increased developed. Amazon is near this Lidl depot.

A trades union is campaigning in Exeter on Thursday against what they allege is "poor treatment" of workers at an Amazon depot.

The US internet brand is a major employer in the area, after opening the facility at Exeter Gateway near Exeter Airport in 2019. It previously had a smaller centre at Sowton.

The company employs around 80 people at the 100,000 square feet depot, and increase the number of deliver companies from which it would buy services in the area to around a dozen.

But the Unite union says Amazon is profiting "on the backs of workers" who "toil around the clock." It's not happy that employees are not represented by a union.

Their campaign called 'Action on Amazon' will be at Exeter Cathedral and Quay. According to a statement from Unite, protestors will "spread the word that Amazon workers can blow the whistle on poor treatment, as calls grow for a new deal for the workers that have made Amazon a multibillion pound company.

'Workers toil around the clock to get the essentials delivered to homes during the current health crisis. Amazon's total net sales attributable to the UK increased from $14.5 billion in 2018 to $26.5 billion in 2020 - that's an increase of 82 per cent. But Amazon strongly resists attempts by workers to gain a collective voice of their own."

Unite executive officer Sharon Graham said:“This corporate giant has made billions off the backs of workers. Amazon resists any attempts by workers to gain a collective voice of their own. It is now time that workers have a voice.”

Amazon disputes the accusations. They say: "The fact is we already offer our employees excellent pay, excellent benefits and excellent opportunities for career growth, all while working in a safe, modern work environment.

"Our competitive wages start at £9.70 or £10.80 per hour depending on location, and we’d encourage anyone to compare this to the wages and benefits offered by other retailers.

"Our people have played a critical role in serving customers in these unprecedented times and the new roles help us continue to meet customer demand and support small and medium sized businesses selling on Amazon."

They say they respect employees’ right to join, form or not to join a union.