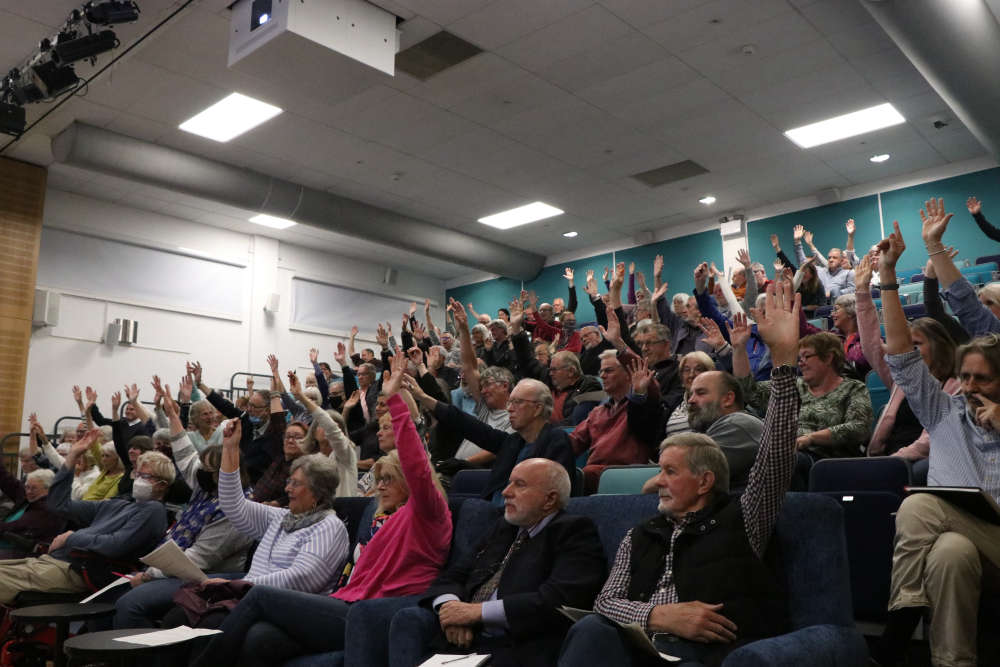 Hands up if you don't want Aldi!

Locals not happy with prospect of supermarket

Residents in Ivybridge have voiced strong opposition to plans for a new Aldi supermarket in the town and many say the project should not be receiving public money.

More than 100 people attended Ivybridge Town Council’s annual town meeting on Monday chaired by mayor Cllr Sara Hladkij (West) who urged local people to formally object to the plans before the deadline on Friday 19 May.

In recent years South Hams District Council has considered proposals to bring more shoppers to the town by developing a car park including a discount food store.

The area behind Ivybridge town hall has been earmarked for redevelopment with plans for a new Aldi supermarket on the Leonards Road car park.

At the meeting, held in the Watermark arts venue, Cllr Hladkij asked for a show of hands on whether people were against the idea of an Aldi store there.  Almost every hand in the room was raised.

The district council has agreed to invest around £9 million towards construction, which many of those attending the meeting were unhappy about.

One man said: “I’d like to question the legality of using public money to subsidise a multi-national corporation.”

He also repeated concerns voiced by some local people about a decision not to replace the now derelict southern footbridge between Ivybridge Leisure Centre and Glanville’s Mill shopping centre.

The main wooden footbridge to the north of this has now been replaced with a new metal construction.

The speaker continued: “We go on about the second bridge. Nobody’s willing to fund that.That would be nothing like the cost of the supermarket.

“The way to regenerate Ivybridge is to have free parking. Why don’t we use that money to subsidise the car parking charges which they all see as an income stream?”

A survey by Ivybridge Town Council of over 300 residents revealed many people are also worried about the disruption while building work is underway.

It has been estimated that work could take up to 15 months and most of those who took part in the survey said they would visit the town centre less.

An overwhelming majority of participants did not believe the new Aldi  would contribute to the regeneration of Ivybridge.

But just over half of those in the survey did not believe there was anything South Hams District Council could do to help people use the town centre during construction.

One woman at the annual meeting suggested the district council was not in touch with the needs of Ivybridge people.

“Ivybridge … Think where it’s placed! The moors, the river, the sea and all the rest of it,” she said.

“It should be a destination town therefore, as well as having the facilities.

“The river should be a focal point. nPeople should be thinking of [their] mental health and wellbeing – a big topic today.

“That’s what we should be doing. And having people here in the centre of town, you can have your leisure, you can enjoy things with your families. Everybody around you. Have a coffee.

“You can use the local shops.”

Nobody spoke in support the proposed Aldi supermarket but some people said they would be happy for one to be built out of the town centre such as near the railway station.

As Cllr Hladkij closed the meeting she urged people to make their views known on the South Hams District Council website.