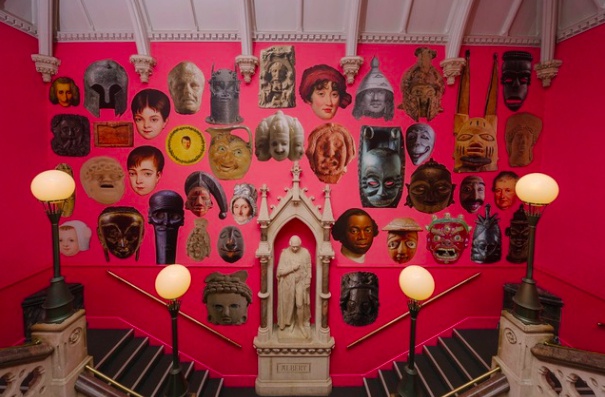 Welsh sculptor, artist, writer and film maker Bedwyr Williams exhibition at the RAMM in Exeter is a special commission to celebrate the museum’s 150thanniversary and is closely tied to Exeter and the museum. It also has clear links to much of Williams’ highly respected work, such as the geographical focus seen in his installation representing Wales at the 55thVenice Biennale.

A sweeping entrance staircase greets visitors from Queen Street. Above is perhaps the more obvious part of the installation - a collection of faces from the museum’s collection, surrounding the statue of Prince Albert in the centre. The faces dwarf Albert and vary from paintings to archaeological objects.

Some have almost jeering, comical expressions: just one example of Williams’ trademark humour. Another is revealed when he describes his intention for the piece, as Albert looks down at the floor, finally getting the chance to look at the visitors that have stared at him for 150 years. The faces  make the exhibition feel accessible – their expressions can be interpreted however the visitor wishes. Williams describes it as: “a clever kind of local anaesthetic to get a point across” as when you make someone laugh, he says you’re “tapping into something they have less control over”.

The second part of the installation focuses more on Exeter relationship to the museum. It’s a video featuring the faces from the wall directly composited onto a wooden model from the RAMM’s collection, staring at diners in the cafe. While it may not seem like much to start with, if you sit in the café and watch, the history of each item provokes questions about its inclusion. It’s a tool to make you want to explore the museum further. Similar to his original idea for the film, Williams wants the faces to: “fly over the city”, to capture the attention of close neighbours who perhaps don’t know about all of the things in the museum that have come from all over the world.

Williams’ work is an intriguing addition to the museum, absolutely worthy of its 150thanniversary commission – interesting and thought provoking, it’s likely to capture the attention of and raise a laugh from all visitors, young or old.