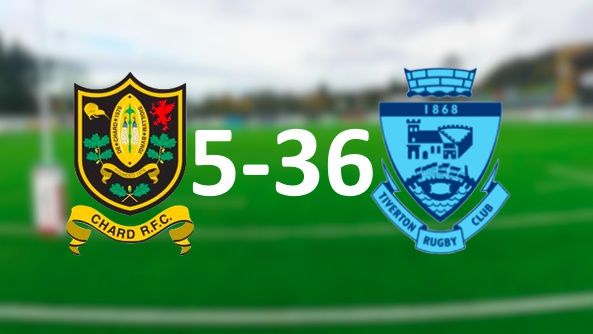 The league win, Tiverton's sixth this season, lifts them fifth in the table.

Reflecting on the game, Tiverton RFC Director of Rugby Jon Hill, says: “Our performance on Saturday was extremely pleasing, and shows signs of further improvement in our mentality and our game management.

“Our Away form has been somewhat inconsistent this season, and therefore a bonus point victory over a side who rarely lose at home, and in fact have only lost at home to Sidmouth this season, is a superb return. We have gained bonus points in narrow losses away at Truro and Wellington, and drew away at Paignton. However, on Saturday, we really grabbed hold of the game and were extremely dominant for large parts.

“Captain Jack Sampson and half back partner Matt Down managed the game really well and put us in the right areas of the pitch. Our forward pack were once again a strong force with everyone contributing. Ben Vickery (Pictured) gained the man of the match award for his two tries and an industrious performance, but this really was a real team effort, with a high work rate. Centres Greg Mills and Alex Pike gave us some real go forward and Adam Willows was exceptional at full back and then at ten later in the game.

“We now look forward to a bumper “Super Saturday” where we host a Mid Devon Derby against high flyers Crediton (2.30pm kick off). We also play Crediton at 2nd and 3rd xv level this Saturday , so an awful lot to look forward to. We hope to welcome back Mark Schofield, Ben Prouse, Henry Frankpitt, Jonny Fairclough and Ross Bovingdon into the selection discussion, all of whom were missing from the Chard game.”