The first glimpse of what the new, improved A303 will look like when a major dualling scheme is completed has been revealed.

Highways England was granted permission in January to dual the A303 between the Sparkford and Podimore roundabouts in Somerset to improve journey times.

Work on the scheme, which will cost up to £160 million, will  begin in September – though Highways England has promised there will be no road closures until March 2022.

The agency has now published a full digital rendering of how the finished road will look following a virtual exhibition held earlier this month.

The video shows a detailed virtual fly-through of the new route, travelling east from the Podimore roundabout to the new Hazlegrove underpass which will be created.

It also features an aerial look at all the new junctions being created – including the Steart Hill bridge and the complex arrangement near the Sparkford services, with the existing roundabout becoming a more minor fixture.

Highways England published its construction timetable in late-June, with compounds being created along the road and temporary roads being built to reduce construction traffic on the carriageway over the next two years. 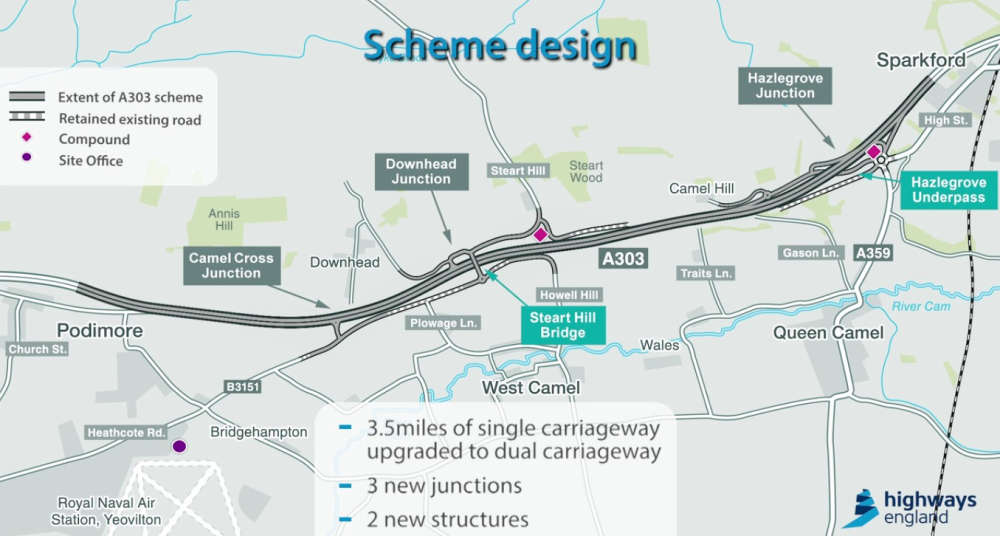 The proposed route of the A303 Between Podimore and Sparkford (courtesy: Highways England)

The agency hopes to have the new road open to the public by the end of 2023, if things proceed according to the current timetable.

Speaking before the virtual exhibition, project manager Hannah Sanderson said: “The scheme is incredibly important for Somerset’s future, vital to the A303/ A358 corridor, and is part of the biggest investment in our road network for a generation alongside the A303 Stonehenge tunnel project.

“From a project perspective, it’s exciting that we are now close to works starting in September, with the scheme supporting economic growth and facilitating a growth in jobs and housing by creating a free-flowing and reliable connection between the south east and south west.

“It will also tackle a long-standing bottleneck, reduce journey times to the south-west and improve traffic flows in that area at peak times and during peak seasons.”

For more on the A303 scheme – including a chance to view the virtual exhibition – visit www.highwaysengland.co.uk/a303-sparkford-to-ilchester.