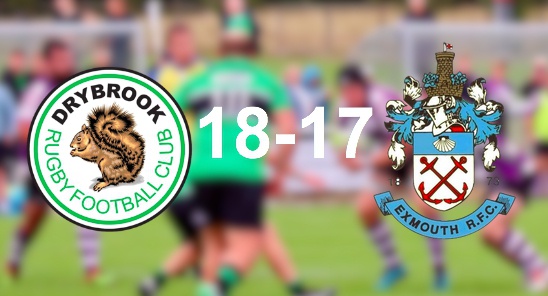 The Cockles grab a bonus point on the road despite loss in Gloucestershire.

In a keenly contested encounter, Exmouth contrived to miss the opportunity to make this a second win of this South West Premier Division campaign.

It was Drybrook who took an early lead on 2 minutes, after giving away penalty in within kick range,3-0. Despite the early set back it was Exmouth who then looked to breach the Drybrook defence. From a spill of the ball forward the Drybrook backs took the opportunity to counter from virtually their own line. After tidy inter-passing they duly scored the first try which was converted, 10-0 after 6 minutes.

Not the start Jack Fahy's men wanted and for the next 30 minutes his players responded and battered the Drybrook line. 12 minutes in to the game the forwards were rewarded with a penalty try, 10-7. Despite repeated attacks it was Drybrook who then worked their way up field. A feature of the day were needless penalties that were launched to touch the the massive boot of the Drybrook 10, resulting in field position for the next Drybrook score, 15-7. Harry Ottaway replied with a penalty for Exmouth on 38 minutes to bring the half to a close at 15-10.

The break galvanized the Cockles and it was clear the direction they headed when Tight-Head prop Liam Cullen, on his debut, breached the Drybrook whitewash and scored his try. Converted by Ottaway, Exmouth took the lead 15-17. At that point it seemed that Exmouth would work to take control of the match. Despite this, it was the Drybrook who had another penalty opportunity at 55 minutes, 18-17.

After that it was Exmouth who worked to recover. Unfortunately the tone was set for the rest of the afternoon. Losing the ball through turnover, unable to hold on to the ball in contact and missed opportunities handed winners League points to the hosts.

The pack dominated all day and backs looked lively but could not establish the smooth patterns from the previous week, with interchanges from the bench, Harrison Marsh at Hooker, Connor O’Shaughnessy in the back row and Tom Whelan outside, the Cockles continued to try and find the winning score. So on to next weekend when Exmouth entertain Exeter University at home.