City bag a point in a two-all draw 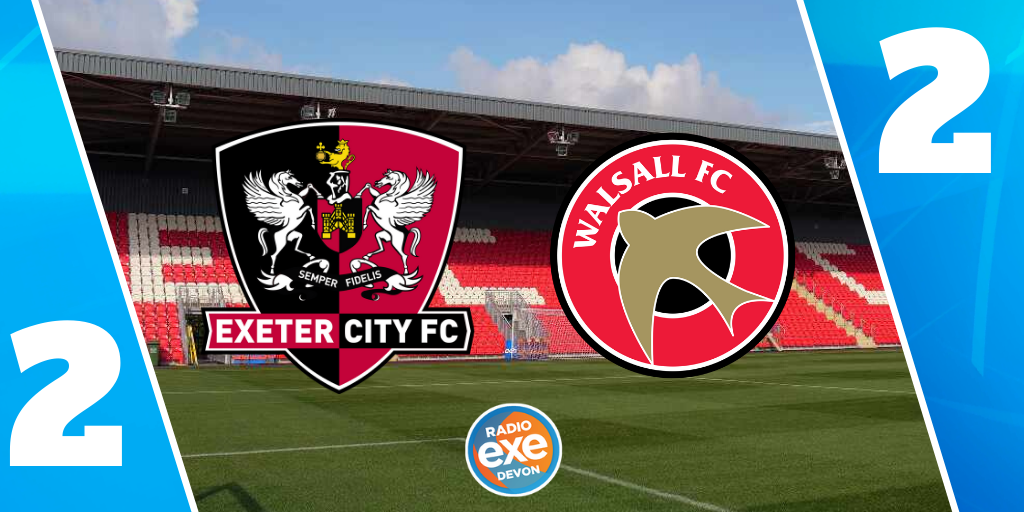 They remain sixth in the table.

The rain didn’t dampen the spirit at St James Park for City’s fixture against Walsall – nor did it put people off going. 4839 people were inside the stadium, 370 of them making the trip down the M5 from just north of Birmingham.

Within five minutes of the kick-off whistle being blown, a cross from Pierce Sweeney meant that Timothee Deing could put the ball in the back of the net.

Walsall was close to getting a penalty early on, but the foul by Josh Key was just outside the box. The free kick wasn’t to be.

Minutes later, Walsall’s Osadabe passed it to Miller, who arrived late and ran into the goal net – damaging it when doing so, bringing the game to a temporary halt.

The game resumed with City’s Cameron Dawson taking a goal kick. The Grecian’s had a good run with the ball from the goal kick, but that was intercepted by the Walsall defence when the reds made an attempt to get another goal.

Moments later, City snatched the ball again, giving Jivani Brown a good run. He passed it to Sam Nombe who then crossed it into the box but failed to find anyone.

The game turned around in Walsall’s favour. They had a good chance at a goal with everyone seeming to huddle around the ball from six yards out – kicking it in all directions before the ball was cleared.

15 minutes to half time and Walsall’s Labadie went down in the box and appealed for a penalty. The referee signalled for the game to play on with no penalty given.

Two minutes later, City didn’t learn their lesson about dirty tackles in the penalty area. Harry Kite took down one of the visitors – this time the penalty was given and a goal was scored.

The score at half time was Exeter 1, Walsall 1.

Two changes were made for Exeter City at the start of the second half with Archie Collins and Josh Coley coming on to replace Harry Kite and Pierce Sweeney.

Three minutes into the second half and a penalty was awarded in Exeter’s favour. Matt Jay took the kick but smacked it into the cross bar, with the ball bouncing back. No goal was given.

Shortly after, Timothee Deing was booked for a foul on Walsall’s Brendan Kiernan.

Sam Nombe scored the second goal for City, making the score 2-1. It didn’t stay that way for long. George Miller from the away side made it 2-2.

The last few minutes were scrappy. Walsall didn’t seem too bothered about pressing with the ball. They seemed happy with a draw. The Grecian’s didn’t make much progress either.