Exeter City back in play-off places 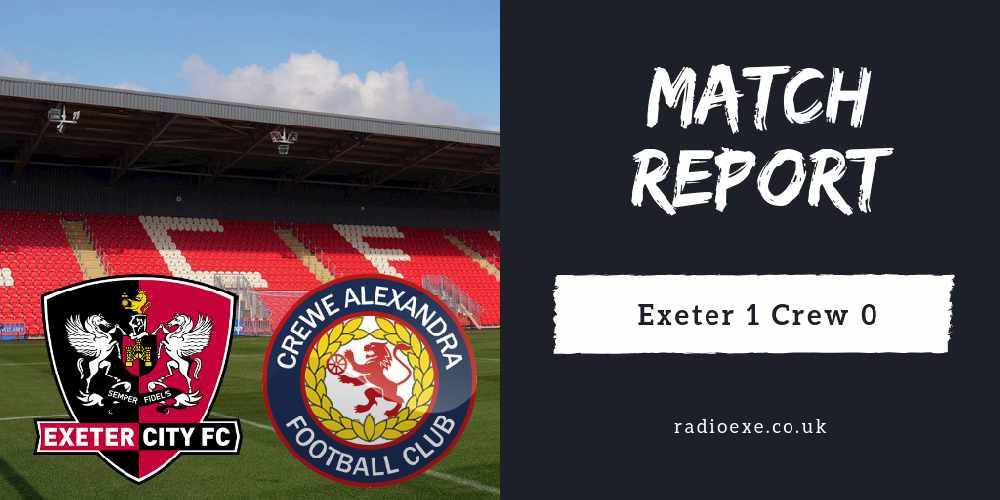 A return to winning ways at sodden St James Park

Exeter City welcomed Crewe Alexandra to a wet and soggy St James Park, in a game which was only just given the go ahead after a length pitch inspection by the officials.

The Grecians came into the game under massive pressure having not won in the league since mid-October and having dropped to ninth in the table.

With passes being held up on the sodden pitch, both teams struggled to maintain possession for any length of time. However, it didn’t take City long to exert some pressure, with in the 8thminute Lee Holmes hitting the bar after a well worked free kick move, which was closely followed by Nicky Law blasting over from close range.

Lee Holmes again came close in the 35thminute, when after another perfectly placed long ball from Pym, Stockley controlled superbly, before putting Holmes through behind the Crewe defence, with the goalkeeper doing just enough to force his shot wide.

As the half drew to a close, City began to control possession, with the Crewe defence finding it increasingly difficult to deal with Stockley’s ability to hold and distribute the ball in the final third. This pressure eventually culminated in Lee Martin finding the top left corner of the net in the 42ndminute, after a fantastic strike from just outside the box with his unfavoured left foot, which will no doubt live long in the memory of the City supporters. This left the Grecians with a 1-0 lead going into the break.

Despite early pressure from City at the beginning of the second half, Crewe began to grow into the game, as they built continued pressure in and around City’s penalty box. However, they were unable to create any clear-cut opportunities, with the Grecian defence holding firm.

With City then beginning to look in firm control and the points seemingly wrapped up, Crewe in the 85thminute produced a brilliant counter attack which set substitute Shaun Miller through on goal, however despite rounding the goalkeeper he struck his shot against the bar much to the relief of the home crowd.

City managed to hang onto until the end, leaving the final score at Exeter City 1 – Crewe Alexandra 0.

The Grecians will begin a busy round of festive fixtures next Saturday with a trip to Oldham Athletic, no doubt hoping todays confidence boosting victory will be the catalyst for a promotion bid in the new year.