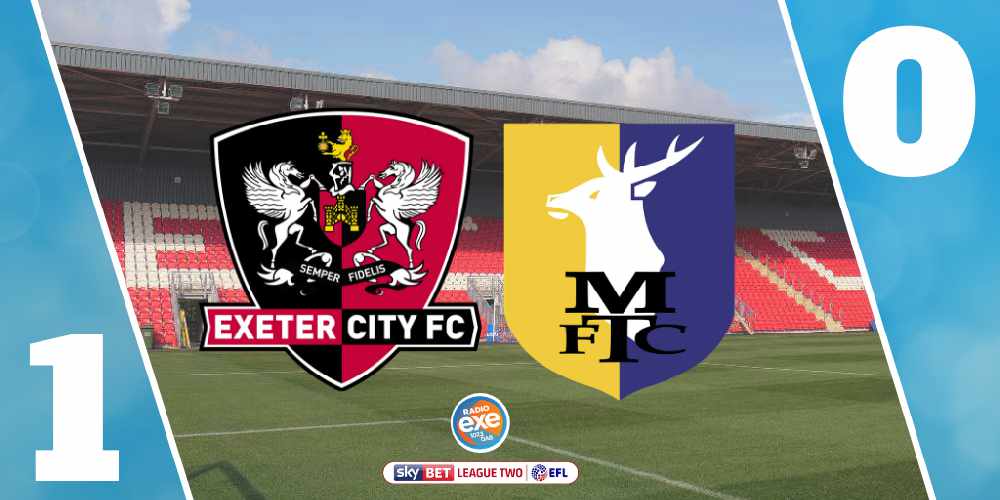 The win leaves Exeter top of the League Two table with 14 points .

Grecians manager Matt Taylor was forced to make one change to the side that beat Morecambe 3-2 last weekend. City’s injured midfield maestro Nicky Law was replaced by Lee Martin.

Exeter went into the break with a well-deserved 1-0 lead, but it easily could have been three or four following an excellent first-half display from the hosts.

However it was the visitors, who are odds on favourites to gain promotion into League One this season, who created the first clear cut chance of the encounter just three minutes in. Jacob Mellis fired a shot 20 yards from goal that went inches wide of Lewis Ward’s post.

Two minutes later, Exeter scored their fastest goal of the season. With the strong gust of wind behind him, Dean Moxey took a quick throw-in to set Ryan Bowman free in behind Mansfield’s high line of defence. The towering centre forward turned well to volley the ball into the roof of the net.

Mansfield had a few more shots from long range – but they didn’t manage to direct a shot on target inside the opening 45 minutes as the contest was dominantly controlled by Matt Taylor’s men.

The Grecians had three more glorious chances to double their lead, but they couldn’t quite find the finishing touch. Lee Martin’s shot, aimed at the near post, was impressively palmed away by Conrad Logan. Randell Williams was inches away from an in-swinging cross, Bowman hit the post from a corner and Matt Jay had a shot cleared off the line. Nevertheless, Exeter led at the break.

The second half didn’t live up to the same expectation as the first. The majority of the game was being played in the centre of the park - and neither side had a shot on goal. However, Exeter came extremely close. Captain Jake Taylor volleyed the ball onto the bar from outside the box.

The game ended in anger for the visitors. Ryan Sweeney was shown a straight red for a deliberate elbow on Bowman.