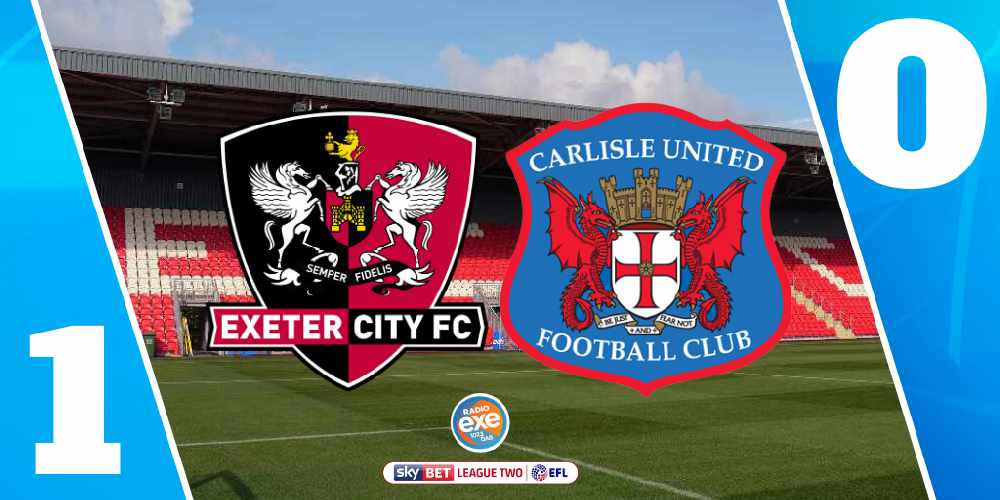 City leapfrog the Cumbrians, who travelled 350 miles for today’s game in Devon, to end October unbeaten and cement their place in the play-off positions.

This was Exeter’s fifth match in just 14 days, so unsurprisingly, Matt Taylor made a few rotations to the squad. Nicky Law made his second start of the season and City’s academy prospect Joel Randell returned to the starting 11 after missing out on Tuesday night.

The Grecians soaked up a lot of early pressure after a lively start from the visitors. With the strong wind behind them, United dominated possession in the early stages – but they couldn’t direct any shots on target until the 20th minute when Joe Riley’s long-range attempt was stopped well by Andersson.

Three of Exeter’s academy graduates; Joe Randal, Josh Key and Archie Collins showcased their individual talent with superb first half performances. The trio caused havoc to Carlisle’s defence - and each player had shots on goal, none of which were converted though.

City’s best chance of the bunch fell to Collins. Grecians winger Randell Williams unselfishly squared the ball to him on the edge of the box; however, the 21-year-old’s tame effort was comfortable stopped by the goalkeeper.

United came extremely close to breaking the deadlock on the stroke of halftime - but Gimme Toure lacked composure and fired the ball wide from five yards out – that miss proved costly five minutes into the second half.

Shortly after the break, now with the wind behind them, Exeter took the lead. City’s towering centre back Tom Parkes was the unlikely goal scorer. A drilled in freekick from Nicky Law found Parkes at the back post who directed the ball into the back of the net on the half volley.

Things soon went from bad to worse for the visitors when Toure received a straight red card. The midfielder reacted viscously to a challenge by Jake Taylor and pushed City’s captain to the floor right in front of the referee.

With the man advantage, Ryan Bowman came close to doubling City’s lead midway through the second half. Jack Sparkes whipped in a delightful ball for the centre forward, Bowman made good connection with the ball, but his headed attempt went just wide of the far post.

United pushed hard for the equaliser and whipped in a number of dangerous balls into Exeter’s penalty area late on – but the Grecians defended well to play out an important win.

As it stands, Exeter City climb to third in the League Two table.

The Grecians are back in action in just three days’ time; they travel to Morecambe on Tuesday night.