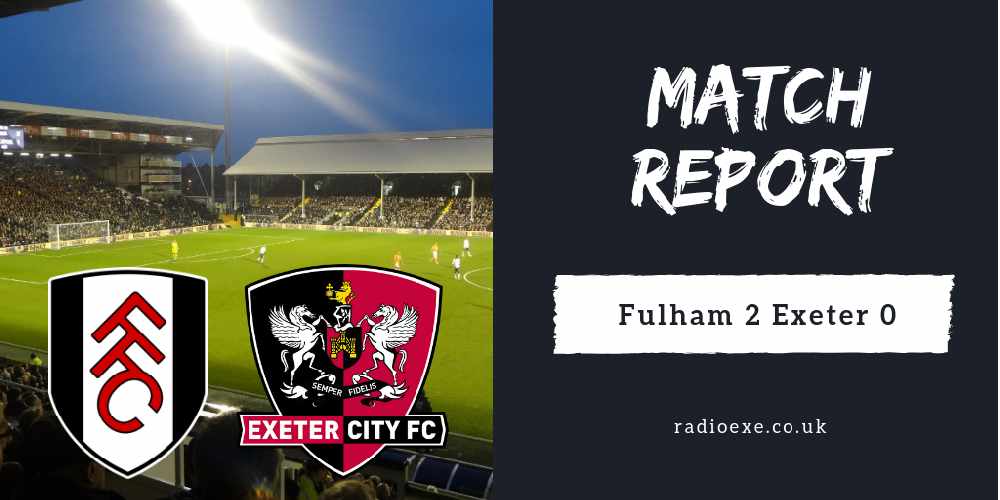 Premiership side Fulham outshine the Grecians with a 2-0 victory

Despite the defeat, it was still a positive performance from a young side that still has "much more to give," says Matt Taylor.

It took Fulham 5 minutes to score in the first-half and three in the second. City's Matt Jay hit the post with an attempted shot outisde the box - the closest Exeter came to scoring.

More than 1,400 Exeter fans made the journey to the capital.

City manager Matt Taylor rearranged his starting eleven from the side that lost to MK Dons on Saturday. Jimmy Oates and Dara O’Shea were both named in the starting line-up making their debuts for the club. Key players including top goal scorer Jayden Stockely and captain Jake Taylor were named on a strong city bench.

Did Exeter feel the nerves? It took just four minutes for the Premiership side to take the lead. Some slick passing opened up the city defence which created space outside the box for Fulham to unleash their first attempt at goal. The shot was parried away by Chirsty pym, who saved it well, but the rebound found the boot of Aboubakar Kamara who volleyed it into the corner.

City had their chances in the opening 45 minutes to draw level. Exeter’s Archie Collins, who progressed through City’s academy, made a terrific challenge inside his own box to create a counter attacking opportunity which ended in Mat Jay agonisingly hitting the post.

Before some fans even took their seats for the second half, the home side doubled their lead. This time, it only took three minutes. Kamara latched on to a loose ball to score his second.

The majority of the second 45 minutes was played in Exeter's half with Fulham in possession. When the Grecians found themselves with the ball, they were closed down rapidly and struggled to breach a strong, well organised Fulham defence. It finished 2-0 after 90 minutes.