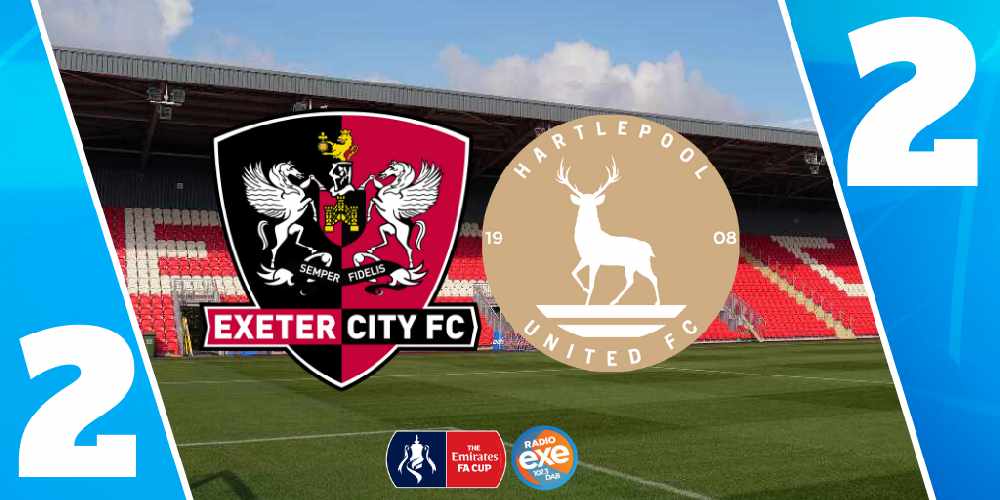 Exeter City comfortably led 2-0 at half time thanks to goals from Ryan Bowman and Nigel Atangana, but Hartlepool scored twice in quick succession to ensure an FA Cup replay.

Exeter City manager Matt Taylor made just the one change to the side that beat Cawley last time out. City’s academy graduate Ben Seymour came into the starting 11.

City dominated the first half and deservedly went into the break with a 2-0 lead.

It was Hartlepool, however, who had the best chance to break the deadlock – and it was a glorious one. Josh Hawked threaded the ball through the heart of City’s defensive for Gime Toure. The winger did well to skilfully chop inside of Aaron Martin inside the box, but his attempted shot at goal hit the set netting.

Matt Taylor’s side were controlling possession and 20 minutes in, they got a deserved goal. Nigel Atanangaa did well to on the wing to beat his defender and whip in a good-looking ball towards the head of Ryan Bowman – City’s centre forward jumped the highest to head home from five yards out.

10 minutes later, Exeter doubled their lead. Bowman’s back post header was denied sublimely by an athletic save. Unfortunately for the goalkeeper though, the ball bounced off his hand and landed on a plate for Atangana, who tapped the ball into an empty net.

It ended Exeter City 2 Hartlepool 0 at the break

Exeter took their foot off the gas in the second half. Unlike the first, City struggled to create goal scoring opportunities. Hartlepool, meanwhile, scored two goals in quick succession to level the silent the home crowd.

In the 73rd minutes, Hartlepool scored their first goal of the contest moments after Exeter were denied by a selection of brilliant saves. Nicky Featherstone impressively curled his effort into the top corner from 20 yards out.

Less than ten minutes later, Hartlepool made it 2-2. During an attack inside City’s box, Nicky Kabamba fired the ball into the net from close range.

Randell Williams came extremely close to scoring a third with an overhead kick, the winger mad good connection with the ball, but it flew over the cross bar.

It was a frustrating end for the Grecians. It finished Exeter City 2 Hartlepool 2.